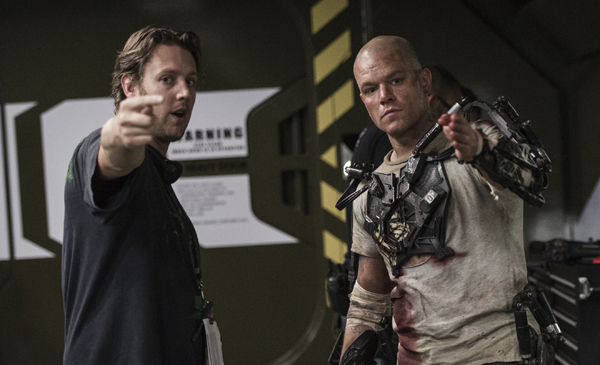 Director Neill Blomkamp, left, and Matt Damon on the set of “Elysium.” [AP/NEWSIS]

NEW YORK - In the desert of big-budget summer moviegoing comes, like fresh water, Neill Blomkamp’s “Elysium,” a dystopic science-fiction thriller bristling with more ideas than all this year’s superheros and action films combined.

“What’s somehow gone away from science fiction is that it’s meant to represent ideas,” says Blomkamp, a 33-year-old South African native with a background in digital effects and a head for sociopolitical tumult. “It’s meant to be this looking glass through which you can look at society a different way.”

Set in the year 2154, “Elysium” finds the Earth a dilapidated slum, with the wealthy living in an orbital space station, a kind of floating Beverly Hills hamster wheel modeled after Syd Mead’s Stanford torus design for a space habitat. The First and Third World divide has gone cosmic.

In dusty Los Angeles (shot in a Mexico City slum), Matt Damon stars as a reformed car thief working in a giant factory in grueling conditions, overseen by an infinitely more rewarded CEO (William Fichtner). When a radiation mishap gives Damon’s character days to live, he endeavors to reach Elysium at all costs.

“I sit there a lot of the time wrestling with balancing metaphor and also balancing entertainment,” says Blomkamp. “Anything I do creatively comes from a place of instinct. I don’t wake up one morning and say, ‘I want to make a film about wealth discrepancy.’ It seems to happen organically.”

Los Angeles holds particular fascination for Blomkamp, who lives with his wife and frequent writing partner Terri Tatchell in Vancouver. He considers its segregated sprawl, close to the border of Mexico “a milder version” of his hometown of Johannesburg. But his relationship with Hollywood is considerably more at odds.

“I would be as far from the film industry as physically possible as I could,” he says.

Famously made for just around $30 million, “District 9” had the look of a much more expensive film, boasting far more political subtext than often makes it into the multiplexes.

“District 9,” which received four Oscar nominations including best picture (a rarity for a genre film), made Blomkamp a phenom. In an earlier Time magazine issue on the 100 most influential people, director Ridley Scott wrote: “There are people in the film industry who appear on the horizon with a unique vision. South African director Neill Blomkamp is one of those rare people.”

The success of the film (it made $210.8 million worldwide) led to numerous studio offers of major franchise movies, including entreaties regarding “Star Wars” and “Star Trek.”

“I get offered those kind of films less and less now because I just seem to be saying ‘no’ so much,” says Blomkamp. “What I want to do for the next few films is find exactly my own voice.”

“If I get into other people’s ideas without fully fleshing that out, there’s some of that that I could lose,” he adds. “It can become impersonal if you’re not careful.”

In September, Blomkamp will begin shooting in South Africa the $60 million “Chappie,” a sci-fi comedy he wrote with Tatchell. Though he cautions that he could change his mind in the two years it will take to make and release “Chappie,” he would like to follow it with “District 10,” a sequel to “District 9” for which he’s written a treatment.