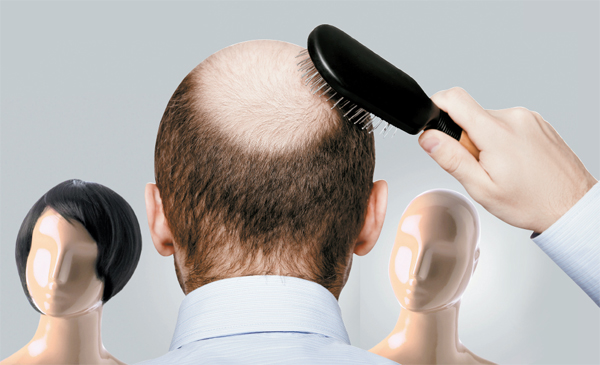 Choi Wu-cheol, 37, never thought about getting a wig even though he looked like a man in 50s.

“Going bald is not something I can control. In addition, I thought obvious hair loss was better than an obvious wig,” said Choi, who is an Oriental herbal medicine doctor working and living in Bucheon, Gyeonggi.

People around Choi, however, coaxed him to visit a wig shop because they thought he needed to make a better first impression meeting patients every day. Choi decided to try his luck and had a wig tailored for himself - and he’s been wearing it for the past three years.

“Looking at people around me who were wearing obvious, shoddy wigs, I used to have negative images about wigs when I was young, but I realized technology has developed a lot after my visit to the wig shop years ago,” said Choi.

Choi’s anecdote is emblematic of the nation’s wig industry, which has been through its ups and downs.

There was a time when wigs were the nation’s bread and butter. After the 1950-53 Korean War, the country was picking up the pieces and had virtually nothing to export.

Mothers and sisters began selling their long tresses, which were made into wigs at factories near Guro, southwestern Seoul, which is now dotted with sleek skyscrapers.

Korea started exporting wigs in 1964 and by 1970 they accounted for 9.3 percent (or $93.5 million) of the nation’s exports. Wigs were the third-largest export after clothes and plywood.

According to a book titled, “Getting a Glimpse of Life History with Documents,” published by Pusan National University Korean Studies Institute, one-third of the wigs worn by North Americans in the 1960s and ’70s were made in Korea.

However, the wig industry started going downhill in the 80s because of surging labor costs. Some factories shut down and others relocated outside the country.

The industry was overshadowed by other high-tech businesses, too. Semiconductors and petroleum products became the nation’s leading exports and most people stopped growing their hair for money, although some do so now to donate their hair to cancer patients.

Guro has also turned into a digital complex where many IT companies are based.

However, with more Koreans losing their hair, from cancer patients to teenagers to young job seekers living in a highly competitive society, the industry is seeing a resurgence. 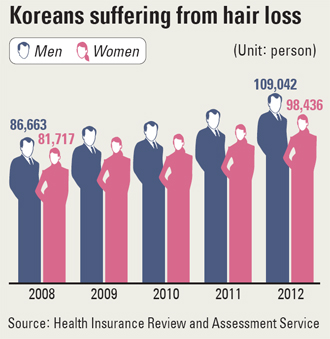 From back alleys to main streets

According to the book “Getting a Glimpse of Life History with Documents,” the United States banned imports of wigs from Hong Kong and Taiwan in 1965 for using hair from Chinese people, which it viewed as products of a Communist regime.

Korea became a beneficiary of the ban.

At the time, hair was in high demand and peddlers hawking odds and ends lured young girls with sweets to cut their hair and ran away with it.

Although the wig industry lost some of its luster with rising labor costs in the 80s, manufacturers improved their technologies - and technical developments made it possible for the nation’s wig industry to take its business to the next level, experts say.

“Unlike men in other countries, Koreans think it is a shame to go bald and they try to cover their baldness perfectly,” said Park Chi-hyung, director of the Korean Association of Trichologist and Wig.

Hi-Mo is a local wig manufacturer that began its business as a wig exporter in 1987 and has succeeded in developing natural-looking wigs that are durable enough to withstand saunas and water sports.

Most wig manufacturers in Korea are mom-and-pop stores run by wig experts in their 50s and 60s, but Hi-Mo was the first and largest company to systematize the process of making tailor-made wigs.

First, the shape of one’s head and hair loss progression is scanned with a three-dimensional scanner.

After the scanning is complete, a mold is created based on photos and it takes between four to six weeks to complete a single wig. About 30,000 hairs are planted on each wig cap by hand.

Hi-Mo has factories in China and Myanmar and three research and development centers in Seoul, Daejeon and China.

“We’ve been developing diverse wig caps and synthetic hair and one of the biggest feats of our own is synthetic shape memory hair that is not shiny but durable, less tangled and heat resistant,” said a researcher at Hi-Mo who wanted to remain anonymous because of company policy.

“We’ve been making breakthroughs, but we still have a long way to go. For example, you can do almost all daily activities wearing wigs, but hair dyeing is still impossible.

“Making it possible is our next goal,” added the researcher.

Of many creations, Hi-Mo recently developed a new wig cap made with Hansan mosi, or fine ramie, a regional product of Hansan, South Chungcheong, for summer wigs. Ramie is a vegetable fiber noted for its length, toughness and breathability.

Unlike smaller wig companies which use 100 percent human hair mostly collected from China and countries in Southeast Asia, Hi-Mo mixes shape memory hair and human hair in a ratio of 4:6.

Shape memory hair is synthetic hair that molds quickly to the shape of a head and “remembers” the shape of that head and its characteristics, such as the direction in which the hair is parted.

Tailored wig prices start from 1 million won and they last about a year to 18 months.

Along with its technical developments, Hi-Mo’s aggressive marketing played a crucial role in raising the public’s awareness of wigs. From the late 90s, Hi-Mo started airing TV commercials featuring Lee Deok-hwa, a popular bald actor in his 60s.

“Before Hi-Mo, nobody openly talked about wigs in Korea,” said Park, director of the Korean Association of Trichologist and Wig. “Wig shops also used to be located in the back alleys, but that began to change with the aggressive marketing of Hi-Mo.”

Still, many Koreans want to hide the truth that they are wearing wigs. Thus, Hi-Mo’s nationwide shops have the smallest possible signboards outside its buildings and all of the counseling rooms are divided by high partitions to provide privacy to those who want to customize their wigs in a hush-hush manner.

Over the course of several decades, Hi-Mo grew into a wig manufacturer that has a strong footing in Korea along with handsome profits.

The company earned 140 billion won in sales in 2011. Of its total annual sales, 60 billion won was generated from domestic sales and the rest is earned from original equipment manufacturing, or OEM.

Prompted by the success of Hi-Mo and an increasing number of women who are struggling with hair loss, the company launched another wig brand, Hi-Mo Lady, in 2010.

Hi-Mo is a household name in Korea, but many of the first-generation wig manufacturers, which initially moved to third-world countries when labor costs spiked in the 80s, are also doing well.

One of them is Sana Industries Co. Ltd., which has five wig factories in Tanzania, Ethiopia, Zambia and Uganda, along with 5,500 African employees.

The largest wig market in the world is in Africa, and Sana makes nearly half of the wigs that are distributed in East Africa, targeting African women who are in need of fashion wigs.

“There are many Korean wig manufacturers that are thriving overseas. It is hard to track their total sales, but about 60 percent of wigs distributed around the world are products of Korea,” said Park.

Korean synthetic hair is also exported to as many as 20 countries.

Because synthetic hair is very close to human hair and durable to heat, its price is twice as high as polyvinyl chloride fiber, material that is commonly used in wigs.

Technology has played a decisive role in reviving the wig industry, but another reason is an increase in the number of Koreans who are losing their hair.

“Hair loss is not an issue only for men in their 40s, 50s and 60s, but a problem of more and more people from diverse age groups,” said Park Cho-hee, the manager at Hi-Mo Lady’s Jongno branch, central Seoul.

“I see more teenagers who suffer from alopecia and men in their 20s and 30s who have thinning hair. They need wigs for a better first impression for job interviews. Another notable change is the rapid increase of women customers who are in need of wigs,” added Park.

Numerous findings and researches show a close link between stress and hair loss - and Koreans are no exception.

According to the Health Insurance Review and Assessment Service, the total number of Koreans suffering from hair loss has increased from 168,380 in 2008 to 207,478 in 2012.

Also, the Ministry of Health and Welfare and the National Cancer Center reported in 2007 that one in four Korean men and one in five Korean women have cancer. Many cancer patients choose to wear wigs after receiving treatment that makes their hair fall out.

Sideburn wigs are often sought after by men who are on their military duty.

When they are off base for leave, most of them want to cover their crew cuts with baseball caps, but they still want to look cool. That is where sideburn wigs come in.

“We have a rosy outlook for the wig market,” said Park. “That’s because it is almost impossible to stop going bald and people need wigs, after all.

“And we Koreans have the best finger dexterity.”