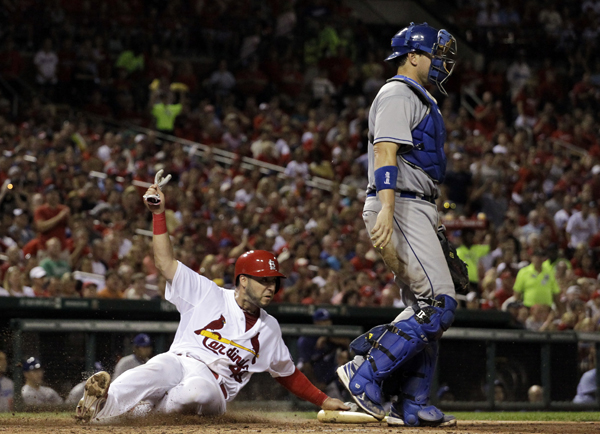 They were just trying to continue their own hot play of late.

That plan worked to perfection as Beltran and Matt Adams homered in the eighth inning to help the Cardinals snap the Dodgers’ 15-game road run with a 5-1 victory Tuesday night.

“We weren’t thinking about them, we were thinking about us and what we’re capable of doing,” Beltran said. “It works better if you just worry about yourself.”

The Dodgers’ road winning streak was a franchise record. Their previous loss away from Chavez Ravine was a 4-2 decision at San Francisco on July 6.

“This just means we’ve got to start a new one tomorrow,” Kershaw said. “It was a pretty cool thing, for sure. It’s definitely not something to take lightly.”

Adrian Gonzalez hit a one-out RBI single off Kelly (3-3) in the sixth, but that was it for Los Angeles against Kelly. He left with runners on first and second and the Cardinals nursing a 2-1 lead.

“Kershaw is a stud, but I was just trying to be the same guy I have been,” Kelly said. “Working my tail off and battling those guys.”

Kelly improved to 3-0 in five starts since rejoining the starting rotation on July 6. He was working on a scoreless streak of 20 innings before the Dodgers scored in the sixth. Kelly allowed six hits while lowering his ERA to 2.98. The 20-inning scoreless string is the longest by a St. Louis pitcher this season.

Even Kershaw was impressed with Kelly’s effort.

“He made pitches when he had to and he got a lot of double-play balls,” Kershaw said.

The Dodgers had runners on base in seven innings but failed to come up with the key hit. St. Louis recorded four double plays, all over the first six innings.

“It was one of those games that was a one-run game and we had a couple chances with men in scoring position,” Los Angeles manager Don Mattingly said. “We didn’t take advantage in those spots. Those are the kind of runs that you can’t give away.”

Kershaw (10-7) allowed two runs and six hits in six innings for Los Angeles, which dropped to 15-3 since the All-Star break. The left-hander is 5-2 with a sparkling 1.62 ERA over his past eight starts.