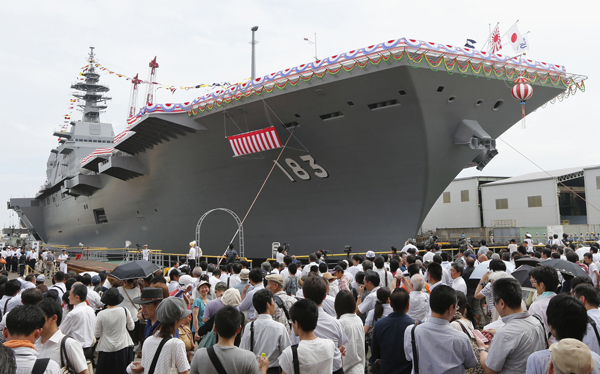 Japan’s largest warship since World War II, the Izumo, is unveiled at Yokohama Harbor as Japan marked the 68th anniversary of the Hiroshima atomic bombing Tuesday.

The Peace Bell struck at 8:15 a.m. at Hiroshima Peace Memorial Park, the exact time of the attack 68 years ago on Aug. 6, 1945, and dignitaries from 70 countries including U.S. Ambassador to Japan John Roos, government officials and some 50,000 civilians gathered to observe a moment of silence. The devastating bombing killed 78,000 people immediately and in the following four months saw the death toll rise to 166,000.

In an address at the ceremony, Abe said that as the only country to suffer through the “horror of nuclear devastation in war,” Japan bears “a responsibility to bring about ‘a world without nuclear weapons’ without fail.

“We have a duty to continue to convey to the next generation, and indeed to the world, the inhumanity of nuclear weapons,” Abe said. 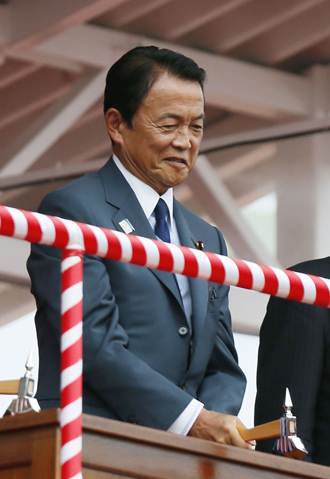 The ultra-conservative Abe administration also wants to revise its pacifist constitution by rewriting an article prohibiting Japan from waging war. Abe has indicated he wants a standing army for Japan, prohibited by the post-World War II constitution, and is bolstering the defense budget and updating Japan’s National Defense Program Guidelines.

In April, Japan refused to sign a joint statement rejecting the use of nuclear weapons under any circumstances in a Nuclear Non-Proliferation Treaty meeting in Geneva. Japan cited the threat of North Korean nuclear development as a reason it could not sign the statement and said the statement was irreconcilable with Japan’s national security policy.

But in his address in Hiroshima Tuesday, Abe recalled that Japan submitted to the United Nations General Assembly a draft resolution on nuclear disarmament with 99 co-sponsor nations, the largest number ever, which was adopted by a majority.

He said Japan began a program for the younger generation, the “Youth Communicators for a World without Nuclear Weapons,” and that next year Japan will convene in Hiroshima a Foreign Ministers’ Meeting of the Non-Proliferation and Disarmament Initiative (NPDI), “a forum that brings together non-nuclear weapons states, in which Japan has consistently taken a leading role.”

Earlier that day, Japan unveiled its largest warship since World War II in Yokohama. Deputy Prime Minister Taro Aso and Secretary General of the ruling Liberal Democratic Party Shigeru Ishiba attended the launch ceremony at the Marine United Corp. plant in Kanagawa prefecture. Aso, a former prime minister who also serves as finance minister in the Abe cabinet, recently retracted a remark saying that Japan could learn from Nazi Germany how it managed to change the Weimar Republic’s Constitution.

The 19,500-ton destroyer the Izumo will be used for national defense purposes such as anti-submarine warfare and disaster relief missions, according to Japanese defense officials.

But the 248-meter-long (814-foot-long) frigate can carry helicopters and launch stealth fighter jets such as F-35Bs, although Japan denies it will be used as an aircraft carrier. It can be seen as a threat to neighboring countries with territorial disputes with Japan including China, Taiwan and Korea.

The vessel bears the same name as the flagship of the Japanese fleet that invaded Shanghai in 1937. The Mainichi Shimbun reported that in the beginning stages, Japan’s Maritime Self-Defense Force even reviewed naming it the Nagato, after the Japanese Imperial Navy’s flagship that led the attack on Pearl Harbor in 1941.

Describing the choice of dates to launch the Izumo, a Japanese official said, “To take into account the rising of the tide and an auspicious day, coincidentally the date chosen was Aug. 6.”