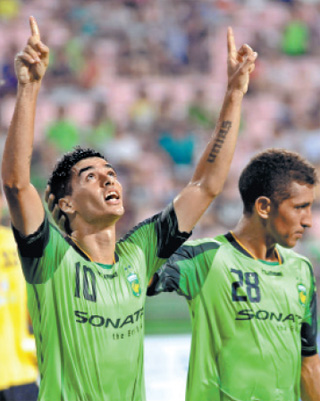 Busan I’Park knocked FC Seoul out of the FA Cup, denying the Choi Yong-soo side’s bid of winning a treble.

The Yoon Sung-hyo squad won, 2-1, on goals from Fagner and Park Jong-woo at the quarterfinals at Seoul World Cup Stadium on Wednesday.

Busan entered the game with a 15-game winless stretch at Seoul World Cup Stadium that started in September 2002. But, the Brazilian midfielder gave the visitors a lead in the 68th minute and Park doubled it on a penalty shot in the 73rd minute.

Ha Dae-sung reduced the deficit in the 89th minute, but Busan fended off additional threats, continuing hope of winning its first title in nine years. Busan reached the FA Cup final in 2010, but lost to the Suwon Bluewings, 1-0.

Seoul, which ended its 15-game undefeated run at home, has a long-lasting FA Cup title drought dating back to 1998. It will now have to focus on the two remaining titles. FC Seoul, the only surviving Korean club in the 2013 Asian Football Confederation Champions League, will face off against Al-Ahli of Saudi Arabia in the first leg of the quarterfinal of the ACL on Aug. 21. The defending K-League champion is in fourth place, trailing the league-leading Pohang Steelers by seven points.

The Steelers, the FA Cup defending champions, advanced to the semifinals with a 2-1 win against Gyeongnam FC at Changwon Football Center Wednesday. It's the third time that Pohang foiled Gyeongnam’s FA Cup bid after it downed Gyeongnam, 2-0, at the 2008 FA Cup final and 1-0 at the 2012 FA Cup final.

No Byung-jun headed a Shin Jin-ho cross, putting Pohang ahead in the 69th minute, but Milos Bosancic answered with the 83rd-minute equalizer. Ko Mu-yeol headed for the winner in the 87th.

The Jeonbuk Motors clobbered Challenge side Suwon FC, 7-2, at home, continuing its bid for a fourth title.

At Jeju World Cup Stadium, Bae Il-hwan and Yoon Bit-garam netted for the hosts in a 2-0 victory against Incheon United. The win put Jeju in the FA Cup semifinal for the second straight year.