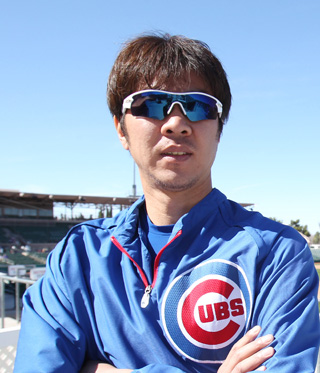 Lim Chang-yong, a 37-year-old minor league rookie from Korea, has had stellar pitching performances since moving up to Chicago Cubs’ Triple-A affiliate Iowa. He pitched six innings in five games through Tuesday and allowed only a run. He struck out five and lowered his ERA to 1.50.

That raises the prospect of Lim, formerly a star reliever in Korea and Japan, moving up to the big leagues within this year, as he initially planned. Although playing in the major leagues is his childhood dream, he got serious about it at an age most players retire and has paid a huge price to come this far.

In a recent interview with Ilgan Sports, Lim was confident that his unique challenge will bear fruit as it did in Japan.

A top-notch closer for the Samsung Lions, he embraced a cut in his salary by 180 million won ($161,820) as he moved to the Tokyo Yakult Swallows after the 2007 season. But, he quickly built a reputation in Japan with 128 saves in four years. His salary last year was 360 million yen ($3.7 million), which made him the sixth-highest paid player in Nippon Professional Baseball.

After sustaining an elbow injury in July 2012, he signed a minor-league contract with the Chicago Cubs at a 10th of his salary in Japan. He left for the U.S. in February.

“I had a good result in Japan, was treated well, but then injured the ligament on my elbow. If I had done rehabilitation in Japan and kept playing there, it would have been more comfortable,” said Lim at Cheney Stadium, in Tacoma, Washington. “But I painted myself being in the U.S., not in Japan, by the time I finish rehabilitation, and that made me feel good. So, I decided to go on a challenge.”

In the U.S., he is no longer a star. For more than a month, Lim has traveled across the U.S., as his schedule required. In addition to a rehabilitation program in Arizona, he has been constantly moving for seven months.

He started with a rookie league in late June, where he played with players half his age. He moved up to Single-A, Double-A and has been playing at Triple-A since last month. Because of his schedule, sometimes he has to leave a hotel at 3 a.m. to get a flight. He also makes his own ticket arrangements.

“It is tough right now, but look, I have gone through all the minor league systems in a month,” he said. “I think it would remain in my memory as a good experience.”

His self-appraised physical condition is 80 percent to 85 percent of what he thinks is his optimal condition. He said that he regards the Triple-A as a warm-up, and that he's saving energy. “I would like to go up to the major leagues quickly, but I don’t want to be in a hurry,” he said. “I have come here after having made a detour for over 10 years, so just several days, what difference could they make?”

He pitched at up to 95 miles per hour at Triple-A. Lim said that he will use his fastball but not as often as he did in Korea or Japan.

If he makes it to the major leagues, he could face off against other Koreans such as Choo Shin-soo of the Cincinnati Reds and Ryu Hyun-jin of the Los Angeles Dodgers. He said he will appreciate it as a learning chance.

“I would be a latecomer in the major leagues, so I need to learn from them,” he smiled.