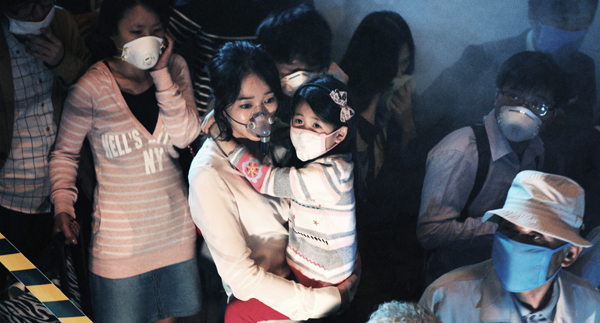 In-hae (Soo Ae) holds her daughter, Mi-reu (Park Min-ha) as they enter a segregated camp after the outbreak of a deadly disease. Provided by I Love Cinema

Freezing planets, earthquakes, tsunamis, alien attacks and wanton destruction are among the themes of countless apocalyptic movies - so much so that few scenarios seem shocking or original anymore.

On the other hand, when a familiar thing that’s dismissed as “no big deal” turns out to be deadly, it can generate unexpected horror.

In light of the looming threat of drug-resistant superbugs, “The Flu” portrays a possible scenario.

“I heard from doctors that if a deadly virus is ever going to happen, that it would be bird flu and that it has potential to affect people,” director Kim Sung-soo said Wednesday at the film’s press conference at movie theater CGV Wangsimni in central Seoul.

The flu is a mutated bird flu that’s found in Vietnamese workers in Korea and is quickly spread to people in Bundang, a wealthy suburb south in Seoul.

The infectious virus immediately throws the city into a state of chaos as it has a 100 percent fatality rate, killing its victims within 36 hours.

From left, director Kim Sung-soo of “The Flu” and the actors who play the main characters: Jang Hyuk, Soo Ae, Yoo Hae-jin, Ma Dong-seok and Lee Hee-joon. By Yang Kwang-sam

“To portray the state as convincing as possible, I referred to the world’s horrific disasters that actually happened and adapted the scenes of the recent riots in Egypt,” Kim said.

Throughout the chaos, the film examines how the people inside and outside Bundang become more segregated as the situation spirals out of control. The moment the sudden outbreak goes public, Bundang turns into a mess with people going almost mad to survive. Among them is a single mother who is a doctor, In-hae, played by Soo Ae, who goes to extremes to save her young daughter, Mi-reu, played by Park Min-ha. Actor Jang Hyuk plays a righteous rescue worker who falls for the doctor and tries to save her and her daughter.

Meanwhile, high-ranking Korean officials are divided into two groups: one that is trying to find ways to save the city and the other that wants to abandon all the people in the city to save the rest of the world.

But when America intervenes under a military treaty, the government, at its wit’s end, orders the destruction of the infected people, whether they are dead or not.

“The idea came as shocking to me that pig slaughter could possibly happen to humans,” said Soo Ae.

She was referring to the fact that about 3.3 million pigs were buried alive in a move to stop the spread of foot-and-mouth disease in Korea from late 2010 to 2011.

“To me, the most impressive scene came when that the newscaster delivered the voting results from the citizens outside [on whether to quarantine the city or not],” said Jang.

What fuels fears are the apt choices of the locations. Kim said, “At the beginning in the script, the virus was supposed to be found on Jeju Island, but I thought it would be more appalling if it took place near the capital, Seoul.

Bundang, a suburb of Seoul, represents an affluent and livable city with lots of residential apartments,” Jang said. “The scene of the empty city after the quarantine was impressive.”

In the quarantined city, the image of the bloody sports stadium where the slaughters take place and the stacked dead bodies serves as a stark contrast to its usual upbeat and joyful atmosphere.

“The Flu” features a star-studded cast, including Cha In-pyo as the Korean president, Yoo Hae-jin as the sole comic relief and Ma Dong-seok as a sly official.

The movie has been highly anticipated as director Kim wielded the megaphone for the first time in 10 years. Kim is best known for “Beat,” a 1997 coming-of-age movie that created a “Beat fever” nationwide, starring Jung Woo-sung and Ko So-young.