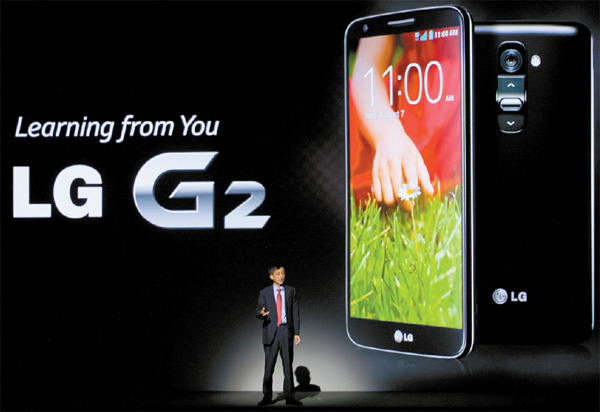 Park Jong-seok, president and CEO of the mobile communications division at LG, introduces the G2 smartphone during a press conference at Frederick P. Rose Hall, Home of Jazz at Lincoln Center, yesterday. Provided by the company

Aiming to solidify the No. 3 position it recently grabbed in the fiercely competitive global smartphone market, LG Electronics yesterday unveiled its top-notch G2 smartphone with never-before-seen functions and design in New York.

This is the first time Korea’s second-largest electronics maker has debuted a product overseas, a sign that it intends to battle Samsung and Apple in North America. The event comes five months after No. 1 Samsung Electronics chose the same city to introduce its Galaxy S4 flagship phone.

Design is what sets the new LG phone apart from its predecessors, the Optimus G and Optimus G Pro. LG has relocated the on-off and volume buttons to the back of the device, allowing the user to control them with an index finger. Removing all the side buttons has made the phone sleeker and improved user convenience, says LG.

The phone has a 5.2-inch diagonal screen while maintaining a 2.9-inch width. Galaxy S4, by comparison, has a 5-inch display.

LG says new features are based on its renewed attention to user experience, or human behavior, which is also reflected in the global slogan for the new product: “Learning from You.”

“Our definition of innovation today is technology that truly resonates with consumers,” said Park Jong-seok, president and CEO of the mobile communications division at LG, in front of about 700 press members at the Lincoln Center Wednesday morning U.S. time. “We have always listened to and learned from consumers in pursuit of innovation.”

The rear-facing camera has 1.3 megapixels - like the Galaxy S4 - but has adopted Optical Image Stabilizer (OIS) technology, an unprecedented feature for a smartphone camera. Usually embedded with DSLR cameras, the OIS prevents blurring and allows for clearer, brighter and sharper images even when in motion or shooting in low light. Another attention-grabbing feature is allowing the user to answer a phone call simply by raising the phone to the ear, made possible by a gyro-motion sensor.

“It is a good product,” said Nho Geun-chang, an analyst with HMC Securities. “But the quality is a different matter from turning profit,” he added, noting LG’s timing for the launch.

August is not a good month to boost sales domestically, given that the government continues cracking down on hefty subsidies that mobile carriers give out to lure new subscribers.

In September, Samsung is set to unveil the Galaxy Note 3 phablet and Apple is expected release the upgraded version of its iPhone 5.

“To sell more than before in North America, its main target, LG might have to spend much more on marketing,” said Nho. “I would say the G2 is not necessarily an instant formidable threat to Samsung or Apple, but a crucial product to help LG raise its brand value among global audience.”