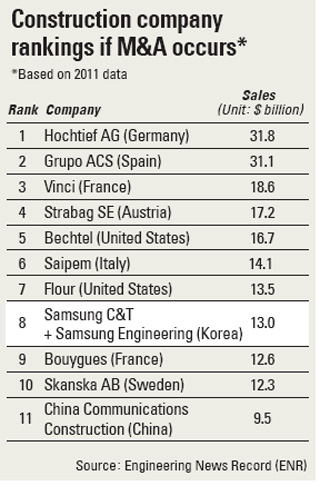 Rumors that the two construction arms of Samsung Group may merge have surfaced again after Samsung Construction & Trading acquired a share of Samsung Engineering.

Samsung C&T, the nation’s second-largest builder, announced last Friday that it bought 245,481 shares for a 0.6 percent stake in Samsung Engineering that is valued around 19 billion won ($17 million). Samsung C&T said the move was just an investment, but securities firms speculate that it could be the start of the merger and acquisition process.

The price of Samsung C&T shares has lost nearly 5 percent since the announcement. Analysts said investors are concerned about Samsung C&T injecting a large sum of money to acquire Samsung Engineering, which has performed poorly this year. The company posted a net loss of 92.8 billion won in the second quarter on the heels of a shocking 218.9 billion won net loss in the first quarter.

Analysts have been releasing reports that foresee a possible merger between the two Samsung subsidiaries as their businesses overlap in the area of power plant construction. Samsung C&T was originally focused on building construction and civil engineering, but since former Samsung Engineering CEO Jung Yeon-joo was appointed as its new leader in 2010, the company also has been expanding to get orders for factory construction.

The securities firm noted the first two scenarios would require a large amount of cash. According to the report, Samsung C&T would need about 630 billion won to buy a 20 percent stake from existing shareholders. In addition, even if Samsung C&T injected the money and acquired Samsung Engineering, newly purchased stocks would be transformed to treasury stocks that don’t have voting rights.

“Unless Samsung C&T made Samsung Engineering its subsidiary, purchasing stakes and entering a capital increase doesn’t seem likely,” said Lee Hoon, a researcher at Korea Investment & Securities. “Consolidation seems to be much more realistic, as it could bring synergy and doesn’t require big cash outlays.”

However, Lee suggested that a merger of the two companies still would not be a walk in the park because it would require approval from general stockholders who could ask for appraisal rights if the price of their shares drop after the announcement of a merger.

“[If the merger happens], it would reduce inefficiency in input of resources and bring many other benefits,” said Lee Kwang-soo, a researcher at HMC Investment Securities.