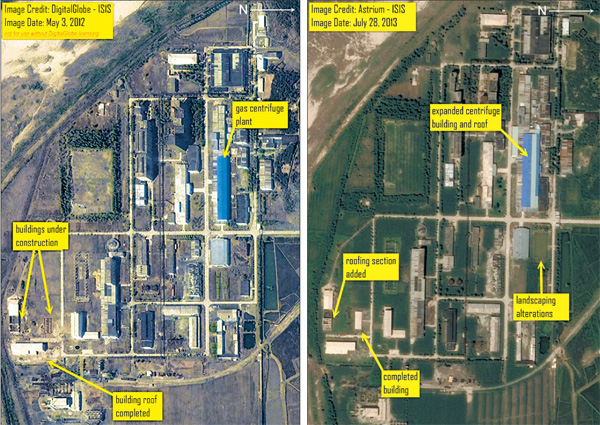 The Institute for Science and International Security (ISIS) posted a satellite photo dated July 28, 2013 (right) on its Web site. Comparing it with a photo dated May 3, 2012 (left), ISIS reported that a facility at the Yongbyon nuclear complex for uranium enrichment had grown. Courtesy of ISIS Web site

North Korea appears to be doubling the size of its uranium enrichment facility in Yongbyon, raising suspicion that the regime might be attempting to increase its capacity to produce weapon-grade uranium, a U.S. institute said.

According to a report by the Institute for Science and International Security (ISIS) entitled “Recent Doubling of Floor Space at North Korean Gas Centrifuge Plant” on Wednesday, a satellite photo dated on July 28 by Astrium Geo-information Services shows Pyongyang has apparently expanded a building in the Yongbyon nuclear complex that contained gas centrifuges for uranium enrichment. The expanded building now has a larger roof, it said.

An expanded facility would be able to house double the number of centrifuges and produce more nuclear material, the report said.

Given the fact that North Korea told Siegfried S. Hecker, a U.S. nuclear expert who visited Yongbyon in 2010, that they were operating some 2,000 centrifuges, the report said the number might rise to 4,000 centrifuges, which could give the capacity to produce at least two nuclear bombs per year.

After comparing the July satellite image with two images by Digital Globe from June 10 and May 3, 2012, other new facilities appear to have been constructed, the report said.

A series of buildings have gone up in the southeastern corner of the fuel fabrication complex, the report said. A previously unused area near the expanded building was apparently turned into a pool filled with water.

However, a South Korean government official who deals with North Korean affairs shed doubt on the report’s analysis.

“When it comes to measuring the nuclear capability of North Korea, the exterior of a facility is not important,” the official told reporters. “What matters is what’s inside the facility, which is not seen in a satellite image.”