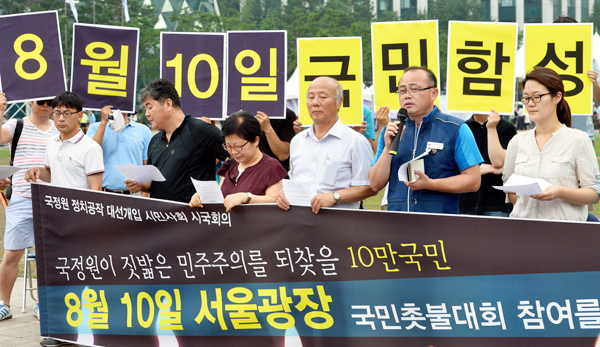 An alliance of 280 liberal civic groups yesterday announces a plan for candlelight protests tomorrow evening in major cities including Seoul, Busan and Daejeon. The group said it aims to attract 100,000 protestors. The protest in Seoul is scheduled to take place at 7 p.m. at Seoul Plaza, shortly after a Democratic Party event, which will start at 5:30 p.m. The Democrats are expected to join the candlelight protest. [NEWSIS]

The main opposition party said yesterday it will hold a larger street rally in the heart of Seoul tomorrow as it tries to fire up its protest campaign by cooperating with anti-government, candle-carrying protesters organized by liberal groups.

The Democratic Party held a leadership meeting yesterday morning at Seoul Plaza, the site of the rallies, and urged the public to join its campaign against the Park Geun-hye administration and the ruling Saenuri Party, which is accused of sabotaging a legislative probe of the National Intelligence Service.

The largest opposition party started Seoul Plaza rallies last week to denounce the slow going in the assembly probe into whether the NIS interfered in last year’s presidential election.

“I never thought it would be an easy fight,” Kim said. “The Democrats will need to brace for the battle.”

He asked party leaders to be ready for Saturday’s event.

While Kim did not specifically mention the candlelight protests yesterday, expectations are high that the Democrats will join in on liberal groups’ anti-government rallies.

In 2008, massive candlelight rallies around the country against the Lee Myung-bak administration’s decision to reopen the Korean market to U.S. beef imports turned into an anti-government movement and paralyzed state affairs for months during Lee’s early days as president.

An alliance of 280 liberal civic groups announced a plan to organize candlelight protests tomorrow evening in major cities including Seoul, Busan and Daejeon. The group said it aims to attract 100,000 protestors.

The protest in Seoul is scheduled to take place at 7 p.m. at Seoul Plaza, shortly after the Democratic Party’s event, which will start at 5:30 p.m.. The Democrats are expected to join the candlelight protest.

Last Saturday, the Democrats hosted a rally at the Cheonggye Plaza. Following the event, DP members including Chairman Kim and 112 of its 127 lawmakers joined the civic groups’ candlelight protests at the same venue. At the time, the Democrats participated not as organizers but as participants.

The DP could face repercussions for joining the candlelight protests. The protesters are challenging the legitimacy of last year’s presidential election and demanding that President Park step down. Kim has distanced the DP from those positions.

The Democrats were also uncomfortable that the minority opposition Unified Progressive Party, which has been labeled pro-Pyongyang, is actively participating in the candlelight protests.

Meanwhile, conservative civic groups yesterday held their own protests in central Seoul to demand the DP end its demonstrations. About 100 members of the Korea Parents Association held a rally only about 20 meters away from the DP’s campaign headquarters at Seoul Plaza yesterday.