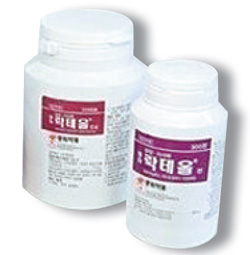 The state-run drug regulator yesterday recalled all stocks of the anti-diarrhea medicine Lacteol and generic versions and banned future sales because the wrong main active ingredient was used in the generics.

Three anti-diarrhea products under the Lacteol name produced by Dongwha Pharm, the country’s oldest maker, and 56 other generics produced by 46 makers will be recalled by the authorities and banned from sale.

The Ministry of Food and Safety said yesterday that Dongwha got a license to produce and sell the anti-diarrhea medicine from French drugmaker Aptalis Pharma in 1988.

Years later, the French company discovered its mistake and informed French authorities that the bacteria in its product was not L. acidophilus but a mixture of L. fermentum and L. delbrueckii.

It also notified Dongwha in 2005. Dongwha, however, did not notify Korean authorities or other Korean manufacturers.

As a result, domestic generic drugmakers have manufactured Lacteol drugs with the original bacteria, Lactobacillus acidophilus.

The ministry said in a statement yesterday that Dongwha should have reported in 2005 what the French company told it. And now the ministry isn’t sure that the original bacteria, L. acidophilus, actually has the effect of stopping diarrhea.

It said yesterday that “acidophilus does not have any potential for health risks” and has been widely used in food products.

“The recall decision was made as the effects of the medicine [in alleviating diarrhea] as reported to the authorities [by Dongwha] have not been certified,” it said.

The drug regulator said it would suspend the 116-year-old drugmaker from producing Lacteol until it completes an evaluation. It also said it will ask prosecutors to investigate the case.

But a ministry official said that the sales ban could be lifted “as early as within two months” if the regulator confirms the effectiveness of the lactobacillus in stopping diarrhea.