Off the beaten track, a train into Korea’s heart

Off the beaten track, a train into Korea’s heart 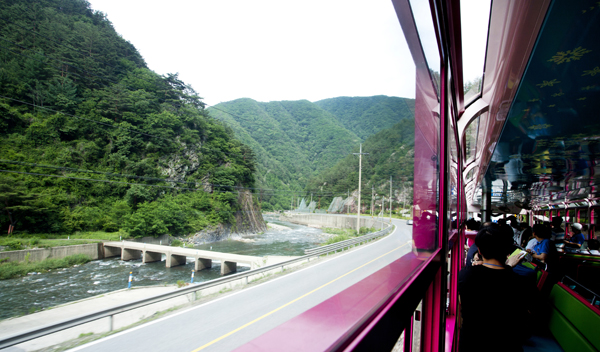 A view of the Baekdukdaegan mountain range from the V-Train. Provided by contributing writer Jeon Ho-seong and Korail

Trains are, famously, one of the most romantic ways to travel. And while Korea’s KTX trains offer smooth, high-speed rides across most of the peninsula, there is another option for people who want to explore the beautiful countryside from a relaxing train.

Two routes, an O-Train and a V-Train, take people through gorgeous, elevated stretches along the South Korean part of the Baekdudaegan mountain range, which runs along the entire length of the Korean peninsula, from Mount Baekdu along the China-North Korea border to Mount Jiri in the south.

Baekdudaegan is often described as the “spine” of Korea’s mountains, and is a key part of Korea’s geography and history.

The routes were an immediate hit with the public. As of June 22, the 100th day of service, 59,008 people have ridden the trains.

Recently, the JoongAng Sunday hopped aboard the O-Train, and brought along several notable cultural leaders - Kim Jong-kyu, the chairman of the National Trust for Cultural Heritage; novelist Kim Hong-shin; and photographer Lee Eun-joo. We were all excited about the trip, like young kids going on a picnic.

From left: The inside of the O-Train takes you back in time, with its unusual interior and songs played over the sound system: Crew members of the O-Train explain the scenery and views that the trains pass. Provided by contributing writer Jeon Ho-seong and Korail

As we departed early in the morning, I dozed off a little.

When I opened my eyes, we were already passing Jecheon, North Chungcheong, heading toward Yeongwol Station in Gangwon.

Amidst the green scenery, I began to notice piles of limestone powder - which is not surprising, considering the 257.2-kilometer (160-mile) circuit for the O-Train used to be Korea’s main railroad route for transporting coal, limestone and lumber. Its heyday was after liberation from Japanese colonization in 1945 until the 1980s and ’90s, although freight trains still can be seen on its tracks.

The O-Train is named for the shape of the route, traveling in a big circle four times a day. Each revolution takes the train to 14 stops over its 4-hour-and-50-minute journey.

The V-Train is much shorter, at just 27.7 kilometers, but it explores the wild Baekdudaegan mountain ridges - indeed, the “V” in V-Train stands for “valley,” as it crosses a sizeable canyon. The V-Train route takes 70 minutes and it makes the trip three times a day.

First we got on the O-Train. The four-car, 205-seat train is different from the usual KTX trains that Koreans are used to. There are chairs in all sorts of colors, some of which face the windows, while others are cosy seats for couples and some are rotating chairs. Calligraphy adorns the ceiling of the carriages and there are rocking horses and toys for children to play with.

The cafe car is decorated with stained glass, giving the dining area a leisurely, relaxing feel. Again, the seats here face the window so people can enjoy their meal while they take in the splendid view. A tteokgalbi (Korean-style meat patties) lunch set costs 10,000 won ($9) while the tofu steak is 7,000 won. There is also a small convenience store near the cafe.

An LED screen installed in each car shows the view ahead of the train from the front of the engine.

We got off at our first stop, Gohan Station, where we were greeting by the fresh air of Jeongseon County, Gangwon. 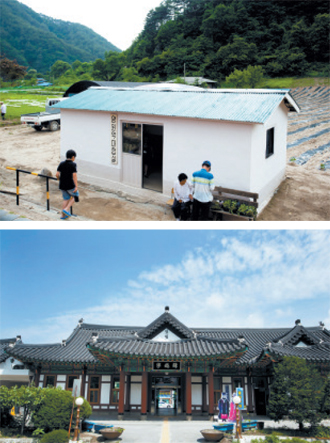 Each stop has its own character, like Yangwon Station (top) which has a small, cozy feel, and Yeongwol Station (above), which is in the style of a hanok (traditional Korean housing).

After a 15-minute bus ride, we arrived at Samtan Art Mine. The Jeongseon regional government has poured in some 12 billion won since 2009 to transform a former mine into an art gallery and mining exhibition.

“Before people dug coal in this area, but now I would like people to discover art here,” said Kim Jin-man, an official from Samtan Art Mine. “That is why we named this place an ‘art mine.’?”

There is also the Samtan Art Center nearby. It used to be the shower room for miners, as well as the place they cleaned their boots. Today, however, the center is an art museum and a residence for artists.

This area is full of remnants from its old days as a mine, where more than 3,000 miners used to work. You can still see the miners’ old paychecks, oxygen cylinders, respirators, black boots and helmets, only now they have been transformed into an art installation.

Inside the art museum, the exhibits are similarly based on the old mine and mining culture. For example, there is an artwork made from hundreds of miners’ gloves - worn out and blackened - made by Chung Kyung-yeun, a fiber art and fashion design professor at Hongik University.

In fact, the collection at Samtan Art Mine is quite amazing, thanks to Kim Min-seok, who runs the facility. As a collector and curator himself, Kim has collected more than 100,000 artworks over the past 30 years, from his travels to more than 150 countries. The gallery also includes a winery which used be a cave, where the chill was bracing yet pleasant.

We then went to a nearby coal museum by bus. Shin Dong-il, who works as a guide at the museum, says that although coal is essential in our lives, mining it was a dangerous job. “It was 35 degrees Celsius (95 Fahrenheit) where the workers mined coal,” said Shin. “They inhaled coal dust all day as they worked. After the work was done and the workers took off their boots, sweat would pour out like water.”

Samtan Art Mine is a 15-minute bus ride from Gohan Station, one of the stops on the O-Train’s route. (From left) Inside Samtan Art Mine, a sculpture at the art museum and an artwork also at the museum.

Summer deep in the mountains

We arrived at Cheoram Station by bus. Now, it was time for us to take the V-Train. The design of V-Train is even more unusual, with black stripes on a white background, which gives the train its nickname, “baby white tiger.”

The V-Train has large glass windows, to give passengers a better view, and solar panels on the roof to save energy. One car’s panels can produce an average of 5 kilowatts, which is enough to run the lights and fans and open and close the doors.

But be aware: As the V-Train’s route is relatively short, it doesn’t have bathrooms.

The theme of the V-Train is quite retro. Its 158 seats are made of green and orange panels with blue legs. There is no air-conditioner, only fans. Songs of the 1970s and ’80s play over the speakers. And glow-in-the-dark stickers in the shape of hearts and stars are stuck on the ceiling, glowing whenever the train passes through a dark tunnel.

The train runs at just 30 kilometers an hour, so people can enjoy the beautiful scenery to the fullest. Once the train starts, crew members come out and explain the views outside.

We got off at Buncheon Station and transferred back to the O-Train, enjoying the return to air-conditioning and faster speeds.

“Traveling deep into the mountains by train makes you feel pretty nostalgic,” said Kim Jong-kyu, the chairman of the National Trust for Cultural Heritage. Novelist Kim Hong-shin also said that traveling for hours was a good way to bond with your fellow travelers.

Finally, we arrived at Chujeon Station. At 855 meters (2805 feet) above sea level, it is the highest train station in Korea. The train stops here for 10 minutes, enough time to allow people to enjoy the fresh air. We got off and took a group photo. Ten minutes later, though, not everyone was back on the train. Perhaps they were too immersed in the scenery.