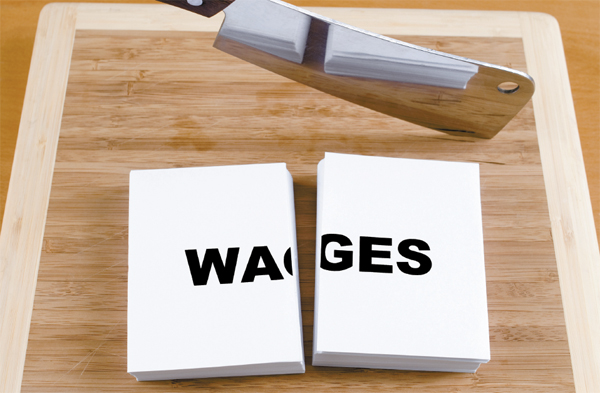 While there have been growing concerns over falling profits at local financial institutions, top brass are cutting their pay in hopes of helping to improve their balance sheets in the long run.

The moves come after criticism from the government and public that even though financial institutions’ business has deteriorated in recent years due to the sluggish economy and low interest rates, senior executives have received ever-higher compensation.

Last month, Hana Financial Group said Chairman Kim Jung-tae and President Choe Heung-sik decided to voluntarily return part of their paychecks to the company and their decision was reported to the board of directors.

According to Shinhan Financial Group yesterday, management is expected to report to its board of directors at a meeting later this month a plan to cut the pay of top executives including Chairman Han Dong-woo and Shinhan Bank President Suh Jin-won by about 30 percent.

Top financial executives are known to receive hundreds of millions of won a year; in some cases, billions of won for group chairmen.

“Our regular board of directors meeting is scheduled Aug. 22,” said an official from Shinhan Financial Group. “One of the issues that will be discussed on that day will be to cut wages of our top management including the group chairman and presidents and executives of group affiliates.”

The official, however, did not confirm whether the wage cut will be reflected this year or take effect starting next year.

“We have been looking into our wage system since early this year,” the official said.

In addition to Hana and Shinhan financial groups, according to industry sources, KB Financial Group is also reviewing a plan to cut more than 10 percent from the pay of its top brass including Chairman Lim Young-rok.

Last month, Financial Supervisory Service data showed that local banks’ net profit in the second quarter reached 1.1 trillion won, down 48 percent from the previous year’s 2.1 trillion won. The regulator said the falling profit was mainly due to a drop in banks’ profit from interest on loans.

Following deteriorating profit, local banks have been tightening their belts by not only deciding to reduce the pay of their executive-level employees, but by shutting down money-losing branches and reducing hiring.

According to financial industry sources, 18 banks are expected to close down 80 unprofitable branches before the end of this year.