In Korea, great outdoors does not come cheap

In Korea, great outdoors does not come cheap 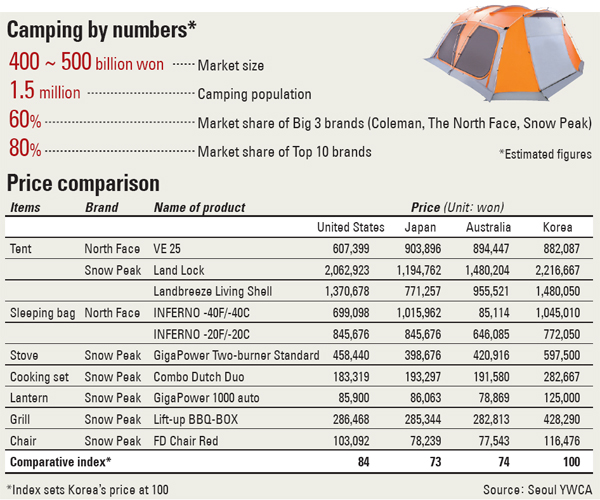 Chung Young-hoon, 44, recently went camping for his vacation, setting up the tent he bought 10 years ago. However, Chung found himself feeling awkward and out of place surrounded by expensive tents with luxurious tables and chairs.

Korea’s camping population is estimated at 1.5 million with a market size of 500 billion won ($450 million), according to data from Seoul YWCA, but high-priced equipment may be eroding some of the pleasure of getting away from it all. The civic group said camping items sold in Korea are 37 percent more expensive than in Japan, 35 percent higher than Australia and 19 percent more than in the United States.

Some camping items were nearly twice as expensive here as in Japan. For instance, Snow Peak’s tent “Landbreeze Living Shell” sold for 771,257 won in online shopping malls in Japan, but in Korea it had a price tag of 1.48 million won.

“It was difficult to find out why products from the same brand are expensive only in Korea,” said Yang Sun-hee, who is in charge of Seoul YWCA’s consumer environment department. “Companies didn’t give clear reasons and denied our requests for information citing it as a business secret.”

According to data, local campers probably have to pay the most in a branch retail store of the outdoor company, followed by department stores. Online shopping malls had the lowest prices on camping items, but Seoul YWCA said the average price difference between the most expensive and cheapest distribution channels was only 26,779 won.

Seoul YWCA said 95 percent of its survey participants agreed that camping equipment is expensive in Korea, while 61 percent said marketing costs are the culprit. In addition, 72 percent of people who have bought camping items said they weren’t satisfied with the quality of the product for the price. According to Seoul YWCA, three foreign outdoor brands - Coleman, The North Face and Snow Peak - account for 60 percent of the market.

The survey estimated the local camping industry will grow to 500 billion won this year, which is six times bigger than what it was five years ago.

“In Korea, high-priced foreign brands are dominating the market, but if you look at the United States, Australia and France, practical and budget brands are also sold,” said Yang. “It seems local consumers’ behavior of showing off to others with expensive brand-name products is encouraging camping equipment manufacturers to expand high-cost marketing strategies. There are many good quality camping items from budget camping brands out there.”