Seoulites come out to the banks of the Han River in Yeouido Thursday night to cool themselves off in the river breeze as a heat wave scorches the entire nation. By Kang Jung-hyun

A strong heat wave continues to scorch the country.

Schools in southern regions that have been suffering the longest decided to extend summer vacations for the well being of their students. Senior citizens have been hospitalized for heatstroke and a few have died.

The Daegu Metropolitan Office of Education said yesterday it notified all 95 elementary and middle schools in the city that were scheduled to begin their fall semesters between August 12 and 16 to postpone the opening days.

The education office recommended they extend summer vacation by three to seven days and start school after Aug. 19. 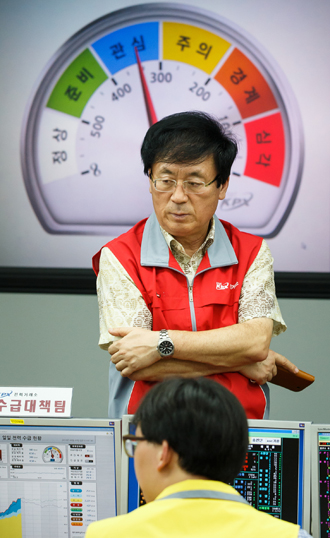 Daegu is known as the hottest city in the country during summers. Yesterday’s maximum temperature for the city was 37 degrees Celsius (98.6 Fahrenheit).

The office told schools that don’t plan to prolong the vacation period to use cooling systems properly to protect students from heat, especially during afternoon classes.

Some seniors in their 60s or older were reported dead due to heatstroke. In Yangsan City, South Gyeongsang, a 64-year-old man lost consciousness while watering chillies around 5 p.m. on Wednesday. He was sent to a nearby hospital but expired.

In Gunsan, a 74-year-old man was found unconscious in a pea patch around 1 p.m. Thursday by his wife. He was sent to a nearby hospital but expired. The maximum temperature for Gunsan that day was 33.7 degrees Celsius.

The South Gyeongsang Provincial Government said 13 people were hospitalized for heatstroke in June, 46 in July and 31 in the first nine days of this month.

They lived in the cities of Yangsan, Jinju, Changwon and Gimhae.

A total of 45 people were hospitalized for heatstroke in Busan along with 27 in Ulsan in the last three months.

The Changwon city government has been using four sprinkler trucks to cool down the pedestrian walkways and asphalt roads between 1 and 4 p.m. every day since Wednesday.

The weather is so hot, in fact, that tourists are avoiding the beaches in southern regions of the country.

According to the South Gyeongsang Provincial Government, the number of visitors at 17 of its beaches decreased from 400,000 last year to 280,000 this year, a 40 percent drop. Namildae Beach in Sacheon City, which had about 20,000 visitors last year, has seen only 5,900 visitors this year.

The average maximum temperature between Aug. 1 and 9 for Ulsan was 35.2 degrees Celsius, which is 2.8 degrees higher than last year’s average. Temperatures in most cities - Seoul, Daejeon, Chuncheon, Daegu, Gwangju, Jeonju - have exceeded the averages between 1981 and 2010.

The average lowest temperature on Thursday and yesterday in Gangneung, Uljin and Ulsan was 30 degrees Celsius, according to the weather agency.

“A North Pacific anticyclone this summer expanded into China, Korea and Japan,” said Kim Hyun-gyeong, spokesman of the Korea Meteorological Administration. “The hot and moist air, generated from the Philippines’ western sea, penetrated the southwestern region of the Korean Peninsula. The strong heat wave will continued over the next couple of weeks and the average temperature in late August and early September is likely elevated.”

The Korea Power Exchange yesterday issued a level-two power shortage alert after reserves sunk to 4.5 million kilowatts at 11:11 a.m. There are five levels of alerts and the highest, level five, is issued when the reserves fall under 1 million kilowatts.