Priceless statue will travel to N.Y.

Priceless statue will travel to N.Y. 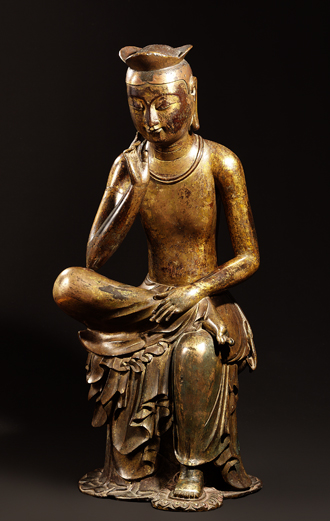 Maitreya in Meditation, Korea’s National Treasure No. 83, will be able to travel to New York after all.

Reversing a previous decision not to allow the seventh-century gilt-bronze statue to be exhibited at the Metropolitan Museum of Art’s “Silla: Korea’s Golden Kingdom” from Nov. 4 to Feb. 23, the Cultural Heritage Administration announced yesterday it will allow the statue to be shown.

The Cultural Heritage Administration’s chief, Byun Young-sup, said no to a request from the National Museum of Korea, which is collaborating with the Met for the exhibition, to allow the statue and two other relics from the Silla era (57 B.C.-A.D. 935) to go to New York, citing concerns about their safety.

Her refusal was unprecedented since a committee of experts within the Cultural Heritage Administration had already given the green light and it is customary that the chief respect the committee’s decision.

The culture ministry is known to have mediated between the Cultural Heritage Administration and the National Museum of Korea to yield the agreement yesterday.

Maitreya in Meditation, also called Bodhisattva in Pensive Pose, is deemed one of the greatest masterpieces of Korean art. Korea has several such statues, but National Treasure No. 83 is considered the best of all.

In February, the National Museum of Korea asked for a total of 26 relics to be allowed to be shown at the Met. In July, the Cultural Heritage Administration turned down the three.