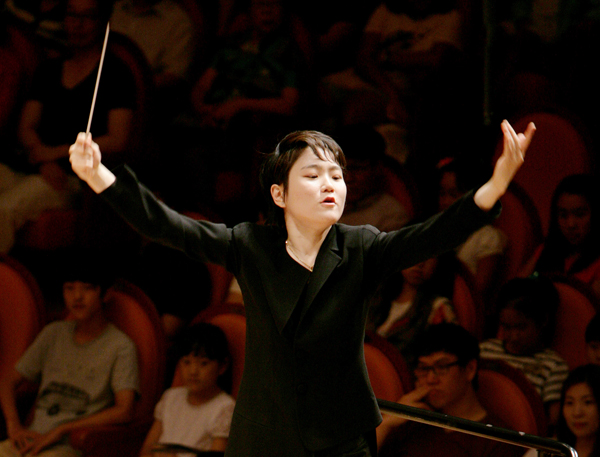 Some Koreans, when they picture Chang Han-na, still imagine her holding a beautiful cello. But these days, the former child prodigy is much more likely to be holding a conductor’s baton.

It’s hard to believe, but it’s already been seven years since the 30-year-old Chang made her debut as a conductor. Despite being a young Asian woman, Chang has already landed a music director position at the Qatar Philharmonic Orchestra, where she officially starts in September.

Prior to moving to Qatar, Chang will kick off her annual festival, “Chang Han-na’s Absolute Classic,” which she has been organizing with the Seongnam Arts Center since 2009. The music events are held on three consecutive Saturdays, beginning Aug. 17. Chang selects about 100 participants each year, all through auditions “with no ties to teachers or schools.” They practice eight to 10 hours a day for about a month, getting ready to play for the festival. As artistic director of the festival, Chang invites famous musicians to accompany her temporary orchestras, including pianist Cho Seong-jin and guitarist Chang Dae-gun in 2010, Lorin Maazel in 2011 and her cello teacher Mischa Maisky for last year’s festival.

“The hero of the Absolute Classic is not me but the members of the orchestra,” said Chang. “Every year, new members get selected through an audition. They gather together during the scorching hot summer in Seongnam and practice even until midnight. It’s their passion and spirit that has allowed this festival to come this far.”

Chang said she wanted this year’s festival to focus on the meaning of the orchestra, its members and its significance.

“It’s unique the way the Absolute Classic selects its new orchestra members each year,” said Chang. “Some of them try out for consecutive years and some come back after studying abroad. Whatever their story is, they come for the music, not because of any ties to teachers or schools. They meet up every day for a month, practice day and night and give their best and then after the festival, they break up. So the only motive and the only goal has to be the music because the month of preparation is extremely intense.

“The participants often tell me that getting to perform at the festival allowed them to realize why they wanted to start in music in the first place. Some say they were agonizing whether to carry on doing music, but then realized that they want to continue with music through the Absolute Classic. Every time I hear such comments, I know in my heart that the Absolute Classic must continue for them and continue to be a festival that exists only for the music and for the musicians.”

As this year’s theme centers on “Orchestra,” the repertoire, according to Chang, “will allow the audience to examine the various aspects of an orchestra.

“If you look at the program, there’s Debussy, Schumann, Stravinsky, Ravel, Strauss, Mahler, Dvorak and Respighi. From their works, we can see how orchestras have matured today.”

The young maestro also pointed out that she chose pieces in the program - such as Debussy’s “Prelude to the Afternoon of a Faun” and Stravinsky’s “Firebird” - because the “titles are somewhat familiar to people’s ears, which means they are famous orchestra pieces, but they may have had a lack of opportunity to listen to them.”

With the new position in Qatar, leading the six-year-old orchestra, Chang will have a whole new array of challenges ahead of her, such as trying to create a musical identity.