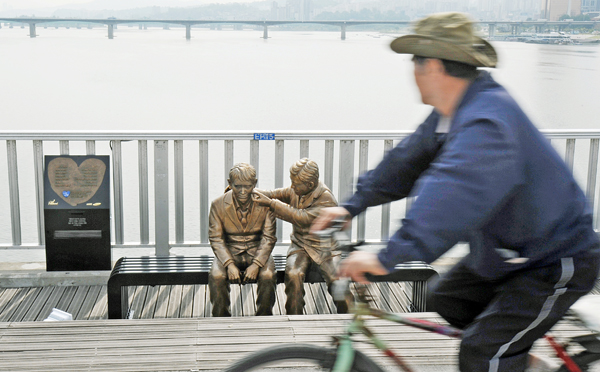 Like many people who write, I have a repetitive strain injury problem. This, it seems, is caused by sitting with the same (unhealthy) posture all day long. The trouble is exacerbated by the fact that I am a lazy sod who doesn’t exercise. About once a year, my lower back will seize up, and take me out of action for a couple of weeks.

The same happened to me in July. After about a week of lying around like a vegetable, I decided to start walking across Mapo Bridge once a day, to see if a little movement would do me some good. I live near Mapo Station, so it is a route I’m familiar with.

There seems to be a different atmosphere there these days. Mapo Bridge has long been known as a suicide black spot. But there are now many people who deliberately go there to be photographed in front of the “Bridge of Life” signs. I’ve taken a few snaps of those messages myself. And a couple of times, non-Koreans have approached me, asking, “Is this the ‘Bridge of Life?’?” or “Is this the bridge with the suicide prevention messages?”

The death of self-proclaimed anti-feminist Sung Jae-gi has brought new traffic as well. Though his was not a suicide in the full sense, admirers are leaving messages of tribute about his “sacrifice.” It was indeed a tragic case, but I would sooner feel sympathy for his family. His followers bring offerings of alcohol and leave with tears in their eyes. Meanwhile, television media seems to be ever-present, despite the criticism that KBS received for being there when he jumped.

Seeing TV crews there made me think about the role of the media in suicide and its prevention. For the three days that Mr. Sung was missing, reporting never let up. Pictures of him, pre-jump and mid-jump, were all over news Web sites. The tone changed after his body was found, but the reporting itself did not stop. The same has always been true for more conventional suicides, such as former President Roh Moo-hyun or famous actress Choi Jin-sil - almost no detail is left out.

The idea of the “Bridge of Life” signs is a well-intentioned one, though I wonder if it raises the profile of suicide, making it seem more common. And the media are obviously not deliberately trying to glorify suicide, but I can’t help thinking that in some way as they might help reinforce the idea that taking one’s own life has a payoff. The emotional attention that the victim receives - see the photographs of mourners, and the quotes of loved ones in the papers, for instance - may send an unwanted message to those in despair. Suicide should never be presented as having emotional rewards, or as a way of gaining redemption or respect.

In general culture, tragic death has powerful currency. It is even a cliche now that a melancholy “ballad” music video should feature an attractive protagonist, who will be sacrificed for emotional effect. Their departure, of course, leaves behind a grieving lover - in dying, the hero is loved and needed more than ever. And then there was singer Kim Jang-hun’s video last year, which made suicide itself into an overt theme.

It makes me sad to think that I learned the expression “Werther Effect” in Korea. I had never heard of it before I came here. Of course, that isn’t to say that Korea is the only country that allows its media to glorify suicides and tragic deaths. But clearly suicide is a problem here, and I think that one way to help combat it would be to compel producers of both news and entertainment to exercise a little restraint.

Though a free press is a wonderful thing, I think there should be an exception for suicide reporting. There is plenty of evidence from around the world showing that detailed information about suicide methods, photographs of victims, and emotional reporting can all lead to “copycat” suicides. For this reason, Norway has put severe restrictions on how its journalists report suicides.

We should also offer positive examples. The story of a person who decided to carry on, and spare the hurt that would be inflicted on their loved ones, is one rarely told. But it really should be. So I’ll start with myself: I don’t know why I’m telling you this, but I often thought about suicide in my second year of university. I made the right choice, and I’m here today as a very happy person.

* The author is former Seoul correspondent for The Economist.