Nadal to face Raonic in final of Rogers Cup

Nadal to face Raonic in final of Rogers Cup 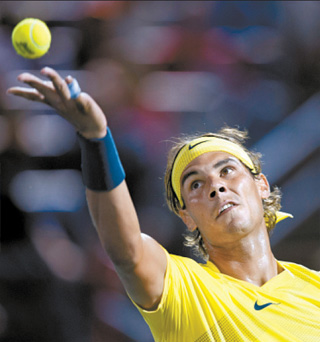 Canada’s top-ranked player will face the fourth-seeded Nadal, a 6-4, 3-6, 7-6 (2) winner over top-seeded Novak Djokovic of Serbia in the night semifinal.

“Milos is a fantastic player,” Nadal said in a courtside interview. “I know him well. He has played a fantastic tournament here. I’m very happy for Canada to have two players in the semifinals.”

Raonic is 0-3 against Nadal in his career and has never won a set against the Spaniard.

“Last time, he gave me a whooping in Barcelona,” Raonic said. “It was a very different surface on clay. And at home for him, it was tough.”

Djokovic and Nadal met for the 36th time, tying the record for the Open era set by John McEnroe and Ivan Lendl. Nadal leads the series 21-15, and cut Djokovic’s lead on hardcourts to 11-6. Djokovic won in Canada the last two years and had won 13 straight matches in the event.

Nadal has won seven tournaments this year, but only one so far on a hardcourt.

The 22-year-old Raonic, from Thornhill, Ontario, will crack the top 10 in the next world rankings after reaching the final of a Masters series event. The last Canadian to win the event was Robert Bedard, who took the last of his three titles in 1958.

“They’re all very special, but I think the top-10 one stands out more just because it’s a goal that I set this year,” Raonic said. “It looked a little bit difficult after how I played recently, but to do it here in Montreal is a relief and it’s a happy feeling.”

On the final point of the third-set tiebreaker, the 11th-seeded Raonic stretched to get to Pospisil’s shot at the net, forcing his opponent to make a lunging volley that went into the net.

“I was winning most of the points from the baseline once the rallies were started,” said the 23-year-old Pospisil, from Vernon, British Columbia. “The tiebreak got away from me a little bit there at the end, a couple of loose points. But I went for it. No regrets. I didn’t want to lose the match playing defensively. I tried to go for it even with the nerves that there were. This time it didn’t work out, but that’s the right way for me to go.”

Raonic said they likely will meet many more times.

“This time it happened on the biggest stage for us so far in both our careers ? the semis of a Masters,” he said. “But for it to really be a big time rivalry, it always has to be on big stages.”

“For my sake, I hope we’ll see each other a lot more,” Pospisil said. “That will mean I’ll keep up the good form. I don’t see why not because I’ve been doing really well the last couple months.”