IOPE changing the face of makeup

IOPE changing the face of makeup 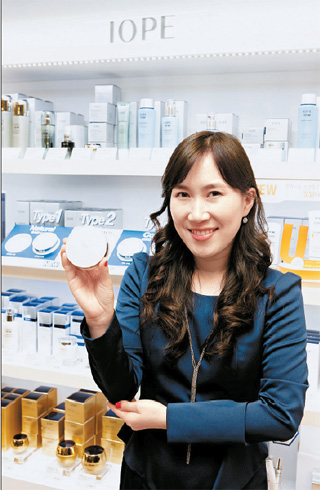 Bio Essence Intensive Conditioning sold 100,000 units within a month of its release last September, and Air Cushion XP SPF50+/PA+++ had a similarly impressive debut raking in 10 billion won ($9 million) in its first month.

The product is an upgraded version of the country’s first multifunction stamp-type makeup sunblock, which was released in 2008.

After a number of trials and errors, IOPE developed the liquid type sunblock foundation that does not flow but gently soaks into the skin without smudging makeup.

In addition, it also came up with the so-called “cell trap technology” for specialized ultrafine dispersion, which earned the Excellence Prize at Korea’s Technology Awards last year.

Following the huge success of IOPE’s Air Cushion, all brands of Amore Pacific including Sulwhasoo, Hera and Verite have been releasing foundation products that combine air-cushion technology. The air-cushion pact has emerged as the people’s pact in Korea, where almost every woman has one in her makeup pouch.

IOPE Air Cushion XP has sold 8.7 million units through the first half of the year.

Q. How did Amore Pacific and IOPE create a new cosmetics paradigm with air-cushion technology?

A. Putting on sunscreen to protect the skin from UV rays every two to three hours on top of makeup has been recognized as troublesome for many customers. We worked with Amore Pacific’s makeup research team on how to solve this inconvenience. In the meantime, a parking stamp caught our eye. We were confident that if we could implement the methods and techniques of stamping a seal into cosmetics, it would bring significant changes to the beauty methods of most women, who use sunscreen and base makeup products together.

How did IOPE differentiate the air cushion from existing methods?

Based on our market research, we found the inconveniences of existing sunscreens, which were mainly the liquid and lotion type. Furthermore, they were water-in-oil types so they would not be washed out in water, or sweat, for better duration, but were heavy and sticky when applied to skin. In contrast, oil-in-water type products are much lighter, but have less durability, and both types were inconvenient for customers who had to wash their hands every time they used the products.

In order to create a sunblock that could naturally be used with base makeup while resolving the inconvenience, we used a special container while creating a freshwater-in-oil-type sunscreen to have both durability and portability.

Finally, we created the multifunctional sun-makeup product with the development of a cushion container that can hold the ruby cell puff, which has 1.6 times more water-holding capacity than a synthetic latex puff.

The creation of the new product type was possible through innovative and proprietary technology, accurate forecasting of hidden demand and the analysis of beauty culture and the makeup habits of customers.

It is costly and time-consuming to introduce a new product or new paradigm. IOPE’s Air Cushion reportedly succeeded without advertisements but through word of mouth and experience marketing such as by operating a customer panel. How did that work?

It was, in fact, difficult to force customers to recognize the excellence of the completely new product. However, we had a strong conviction that once people used the product they would recognize its strengths. So we emphasized increasing the experience rate, instead of TV ads. We chose to directly show the product’s effectiveness and how to use it through TV home shopping channels and large discount stores and cosmetics shops.

What would be some foreign market entry barriers for IOPE Air Cushion and how would it overcome them? What would be successful overseas marketing cases in Japan, China and the United States?

In Japan, IOPE Air Cushion was introduced through a TV home shopping channel last June. Compared to TV ads, they have longer to explain and introduce the products and were tremendously popular among Japanese customers. Sales of IOPE’s Air Cushion shot up 200 percent in the first half of 2013 compared to the second half of 2012 in Japan. It is attracting the attention of Japanese women as an unprecedented innovative product that is changing their makeup culture as well as raising favorable awareness of the IOPE brand.

In addition, the cushion products of Amore Pacific have entered the Chinese, U.S. and South Asian markets. In China, Singapore, Malaysia, Thailand, Vietnam, Taiwan and Hong Kong, Laneige Snow BB Soothing Cushion products are being sold. Products that feature the whitening care function are being sold out every day.

In the U.S. market, we are spreading and informing the innovativeness through Treatment CC Cushion of the AmorePacific, the flagship brand of Amore Pacific since March. Beauty experts in New York have been praising Korean skin care products as being 10 years ahead of U.S. products.

It is inevitable that there will be copycats at home and abroad for such an innovative and popular product as IOPE Air Cushion. What would be the countermeasures?

How could this product contribute to proliferation of the Korean wave, and what would be the parallel cultural marketing plans?

I believe that cosmetic products are consumer products that contain beauty culture. The company being known as the “Asian Beauty Creator” also reflects this value. The new type of cushion product not only impresses customers around the world with world-class technology, but it also takes the role of informing the world about the strengths of Korea’s beauty culture. It’s the result of continuous research by Amore Pacific for the past 68 years on the skin of Korean and Asian women.