In the country’s retail industry, some like it hot

In the country’s retail industry, some like it hot 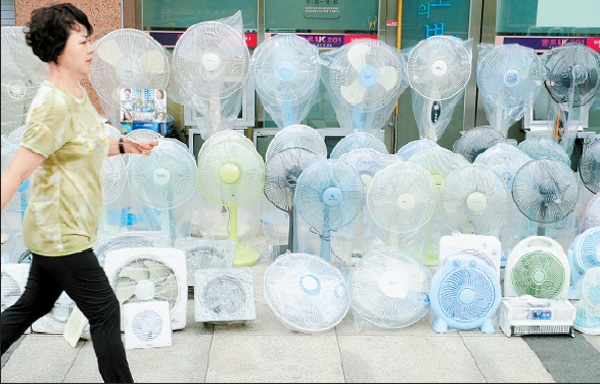 A pedestrian passes by a store in Dongdaemun, central Seoul, last week where electric fans are on sale. [NEWS1]

Not everyone is tossing and turning late at night from the recent humid summer heat. Retailers are seeing significant increases in sales of summerrelated products including cool mats and icy cold treats.

The department store’s branches in Apgujeong and Samseong, both in southern Seoul, sold more than 2,500 patbingsu dishes last Tuesday alone.

Fruit sales, which had been growing about 2 percent for the past month, grew significantly. Sales of watermelons and cantaloupes are now growing above 10 percent year-on-year.

Cooling products are sold the moment they hit the shelves at discount stores.

Electric fan sales are up 48 percent. Lotte Mart said this month that sales coolers are growing at an exceptional rate.

The summer heat continuing late at night is also helping sales of online retailers as many consumers are ordering cold drinks like beer and peanuts for late night snacks.

Interpark, an online auction and shopping mall, said orders on nuts and raisins were up 17 percent, while crackers and snacks jumped 10 percent.

Furthermore, Interpark said sales of energy drinks and vitamin products have seen growth of 140 percent year-on-year in the first two weeks of this month. Auction made a similar claim, saying sales of health supplements including vitamins and red ginseng products were off the charts, spiking 400 percent year-on-year.

“As many people are finding it difficult to get sleep because of the humid summer heat, they seem to be looking for products that could ease their fatigue,” said Kim Jong-dae at Interpark shopping department.