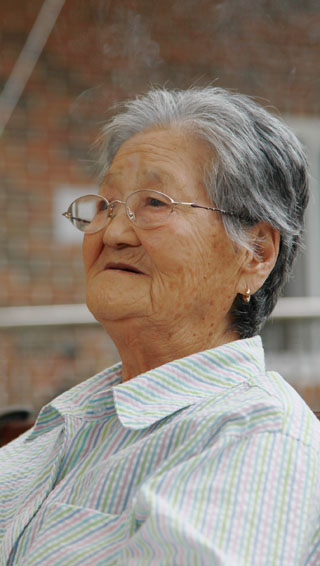 Lee Yong-nyeo, one of the few surviving women forced into sexual slavery by imperial Japan’s military, died yesterday at the age of 87.

The House of Sharing, where 10 of the so-called “comfort women” live, said yesterday that Lee died of old age at 2:30 a.m. at Pocheon Hospital, Gyeonggi Provincial Medical Center. Lee left the House of Sharing last year to live with her son. She was admitted to the hospital last month.

Born in Yeoju, Gyeonggi, in 1926, Lee was forced into sexual slavery when she was 16 years old. She was sent to Myanmar through Singapore. After Korea’s liberation in 1945, she came back to her homeland in 1946 after staying in a concentration camp in Yangon.

Lee suffered from serious psychological damage after the years of sexual enslavement and joined the House of Sharing in 1992. Since then, she led efforts to reveal the Japanese military’s crimes against humanity to the world.

Lee attended the Women’s International War Crimes Tribunal on Japan’s Military Sexual Slavery in Tokyo in 2000 and gave a testimony.

She also demanded that international law define forced sexual slavery as a crime against humanity with criminal punishment for offenders.

Last year, Lee filed a defamation suit against a Japanese rightist together with other former Korean sex slaves. Nobuyuki Suzuki rationalized forced sexual slavery as “voluntary prostitution” on his blog, saying there is no record backing up forced sexual services to Japanese military personnel.

A mourning altar for Lee was set up at Pocheon Hospital in Gyeonggi.

With Lee’s death, the number of surviving sex slavery victims is down to 57. Among them, six are currently living outside Korea.

The Korean Council for Women Drafted for Military Sexual Slavery by Japan said yesterday that its weekly Wednesday rally in front of the Japanese Embassy in Seoul will be dedicated to Lee this week.

The ruling Saenuri Party issued a statement yesterday to express its condolences and promised diplomatic efforts to change the wrongful historical perception of the Japanese government.

“She died without receiving an apology from the Japanese government,” said Representative Min Hyun-joo, spokeswoman of the party. “However belated, Japan must show its willingness to atone for its past crimes of sexual slavery.”