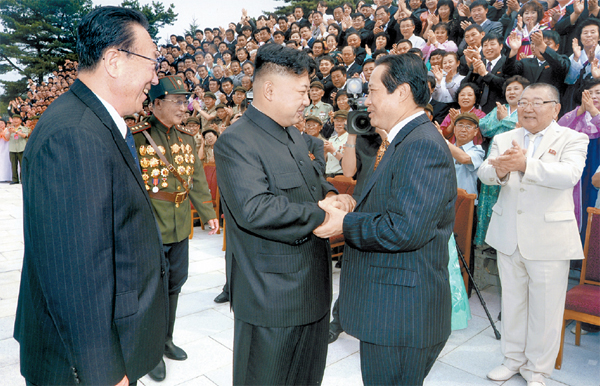 Park Sang-kwon, CEO of the inter-Korean automaker Pyeonghwa Motors Corp., met with reporters on Friday after a trip to Pyongyang from July 27 to Aug. 3 for festivities to mark the 60th anniversary of the end of the 1950-53 Korean War. Park also met with a series of high-ranking officials, including leader Kim Jong-un.

Park, a renowned Korean businessman with U.S. citizenship, has visited North Korea 215 times and runs a series of cross-border businesses including the automobile joint venture based in Nampo, a port city in North Korea close to Pyongyang, and the Pothonggang Hotel in Pyongyang.

“I told Director Kim that I really hope for a peace park in the DMZ,” Park said. “Director Kim Yang-gon responded: ‘If we make the Kaesong park successful, the DMZ issues will be the same.’?”

In a speech to the U.S. Congress in May, President Park proposed building a world “peace park” in South Korean territory near the heavily armed border. North Korea has not formally responded to the plan.

The eight-year-old Kaesong complex has been shut since April. The two Koreas will hold a seventh-round of low-level talks this Wednesday to negotiate a reopening.

“As soon as he grabbed my hands, he told me, ‘I appreciate your long relations with us since the era of the General [Kim Jong-il],’?” Park said. “Then he added, ‘Let’s move forward with the unification of the country.’”

Park said he witnessed many changes in Pyongyang.

“Under the rule of the Kim Jong-un, Pyongyang is changing from the bottom up,” Park said. “The regime was carrying out a large-scale glamorization project on the city, doing landscaping everywhere.”

In June, Park visited several regions outside Pyongyang such as Mount Kumgang, Wonsan and Mount Masik, where the regime is building a ski resort.

Park said North Korea is developing Wonsan airfield into a tourist spot by converting a hotel built for soldiers into accommodation for tourists.

“What really surprised me was that North Korea has privatized three major airfields - Samjiyon, Orang and Kalma, which were all military bases - on the special order of Kim Jong-un,” Park said.

When asked about reports that the ski resort was damaged by recent flooding, Park said, “Only the lower part of the slope collapsed, not the upper part.”

When it comes to the Kim family, Park said he saw Kim Kyong-hui, younger sister of late leader Kim Jong-il and alleged guardian and protector of Kim Jong-un.

“She looked weak,” he said. “But she didn’t seem to be suffering from some serious illness. She was walking normally. I think she is fine.”