Left: The whole view of the Daegu Track and Field Promotion Center. Right: Inside of the indoor stadium in Samdeok-dong, Daegu.

DAEGU - A 73 billion won ($65.7 million) indoor track and field facility built by the central and Daegu city governments has been closed two months after completion because it doesn’t meet international standards.

The center was built to host an international track and field championship next March, which is now in danger of being canceled or held elsewhere. The city government and the builder are blaming each other for the fiasco.

The 5,000-seat Daegu Track and Field Promotion Center was built on 21,577 square meters (5.33 acres) of land in Samdeok-dong, Daegu. It has a 200-meter track, and dormitory and dining facilities for 100 athletes. 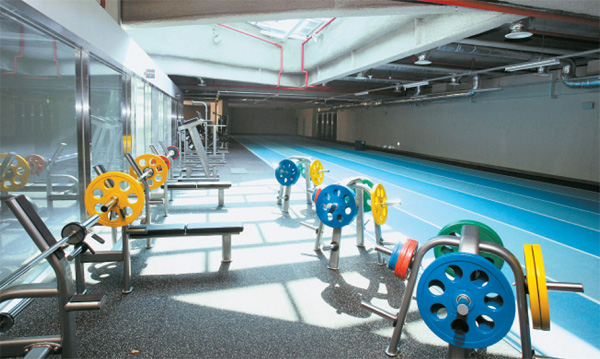 Building the center was one of pledges the city made to the International Association of Athletics Federations to be chosen to host the IAAF World Championships Daegu 2011 and the event scheduled for March next year.

In January 2010, the city government accepted bids for the project. The guidelines given to bidders said the designs had to comply with IAAF standards for facilities for international events.

A consortium of four companies including Samsung Engineering and Construction submitted designs for the center to the city government in June 2010. But the designs didn’t include a 150-meter warm-up track.

After it finally realized the defect, the city government refused to issue a building completion certificate to the consortium. It also refused to pay a final payment of 8.5 billion won to the builders.

Without a proper venue, the championship, which was going to bring in 200 athletes from 100 countries, may be cancelled or moved to another city. Daegu said it is considering building an additional warm-up area outside the new facility.

“The problem is always money,” a city government spokesman told the JoongAng Ilbo. “We estimate that about 10 billion won would be needed.”