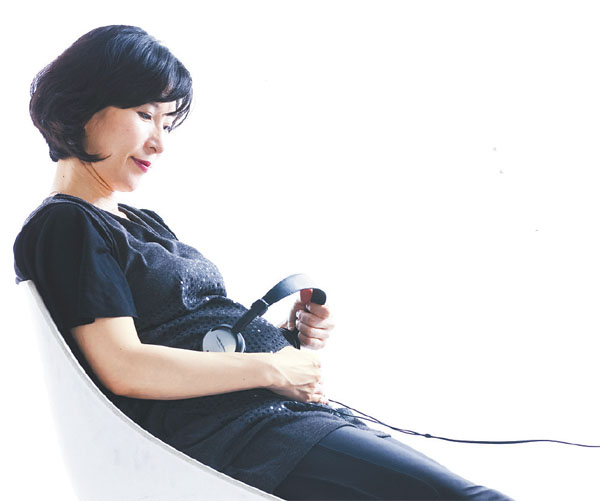 The upside of delivering later is that women have prepared longer and are better educated. Older childbirths also decrease chances of uterine cancer.

When Choi Ha-young’s doctor told her she was pregnant in January, the announcement came as a shock because she is 47 years old.

Choi, an education consultant, gave birth to her only daughter in 1998. She attributed the ending of her periods as menopause, not pregnancy.

The World Health Organization defines late childbearing as taking place after the age of 35. Under that definition, more and more Korean women are having late babies.

“I’ve seen a lot of women in the late 30s and 40s give up pregnancy because of their age, even though they want kids,” Choi said. “I think my pregnancy will give hope to many women. I want to deliver a message that late childbearing can work if you maintain your health and a positive attitude.” Choi works out and does yoga.

At the Cheil General Hospital & Women’s Health Care Center in central Seoul, a major medical center for women in the country, mothers over 40 accounted for 5.5 percent of the pregnant patients, a big jump from 1.5 percent ten years ago. 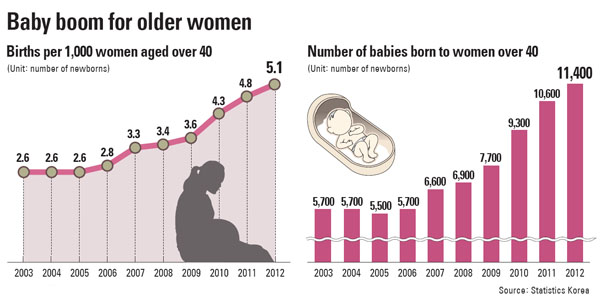 On the other hand, the percentage of expectant mothers in their 20s decreased to 14.8 percent last year from 56.4 percent twenty years ago.

Cha Gangnam Medical Center in southern Seoul, another large hospital, saw its number of pregnant women over 40 increase to 758 last year from 372 in 2000, while the figure for twentysomething expectant mothers dropped by 77 percent during the same time period.

Doctors said many women are having later babies because of economic issues.

“Most of them pushed back parenthood to their thirties and forties when they would earn enough money to better support their children,” said Doctor Kim Am, an obstetrician at Asan Medical Center in southern Seoul.

“It seems that the high cost of education and other expenses of bringing up children is closely linked with the increase in late childbearing.”

Advance in childbearing technology is another factor.

“The development of artificial insemination and in vitro fertilization increased the chances of pregnancy in later years,” said Park Moon-il, an obstetrician at Hanyang University Medical Center. “There was one case of a woman over 50 managing to have a baby from a frozen egg.”

But the most fundamental cause is people getting married later.

“The average age of first marriages goes hand in hand with the trend of late childbearing,” said Kim Dong-sik, a researcher from Korean Women’s Development Institute.

“And a growing number of people are delaying marriages because of trouble finding a suitable partner, the need to establish their careers and finances.”

Having babies at a later age has increased risks. Doctors link late childbearing with a higher likelihood of delivering a smaller baby and more complications during late pregnancy and childbirth. Studies have also shown that women who give birth to their first child at later ages have increased risks of ovarian and breast cancer later in life.

But there is an upside as well.

“When parents have their children in their late 30s and 40s, they have a broader range of information about child rearing because they prepared for it for longer,” Kim said.

Women who give birth over the age 40 were 44 percent less likely to have uterine cancer than women whose last birth occurred at or before the age of 25, according to a study led by a researcher at the Keck School of Medicine of the University of Southern California (USC).

Experts forecast that the late pregnancy phenomenon will continue.

“An increasing numbers of college students graduate from universities after taking one or two years off to land a better job,” said Jeong Dong-myung, a researcher from the Statistics Korea. “And that will lead people to delay pregnancies as well as marriages.”