Icehouses that store food for thought

Icehouses that store food for thought 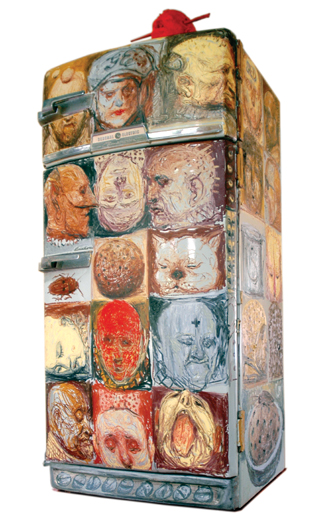 Cuban artist Roberto Fabelo’s metal sculpture in mud “Frio Loco” (2005-06) is in the exhibition. Provided by the Sejong Center for the Performing Arts

With lifestyles that are becoming increasingly busy, few things are as transient as home appliances. We buy them, outgrow them and throw them away without a second thought.

Some home appliances don’t always remain that way. This summer, the Sejong Center for the Performing Arts is presenting a contemporary art exhibition that reconsiders the ordinary facets of everyday life. Featuring several Korean and Cuban artists, the works seek to find meaning and art within the various home appliances that we use every day.

Titled “BINGO ? The Story of Life and Arts from Cuban Refrigerators,” the exhibition plays on the Korean word bingo, which means icehouse.

According to the exhibition organizers, refrigerators are much more than mere home appliances in Cuba and its subtropical climate. As necessities of life, they are passed down through generations and are thus inseparable from family life.

When the time came for these refrigerators to be replaced, some Cuban artists gave them new life by turning them into art. The artwork is neither brilliant nor flashy. Rather, it is a humble expression of the artists’ lives.

“We wanted to display how the artists immortalized the refrigerators that had become junk,” said Kim Mi-kyung, the curator who is overseeing the exhibition. “In another part of the exhibition, we show visual representations of how many products we buy and use over the course of a lifetime. By comparing our own consumer lifestyles with that of the Cubans, we hope that this would allow Korean visitors to reconsider their own consumer lifestyles.”

These visual representations display the transience of the products we use, such as an infographic that shows the number of products a person uses over a lifetime. Juxtaposing this against Cuban refrigerator art seems to make conspicuous consumption especially apparent.

Works by Korean artists inspired by the Cuban refrigerator art are also displayed, including “Second Skin” by artist Jeong Hye-gyeong. It features a male and female set of royal garb made from receipts, conveying an attempt to be clothed in luxury through an endless consumption of goods.