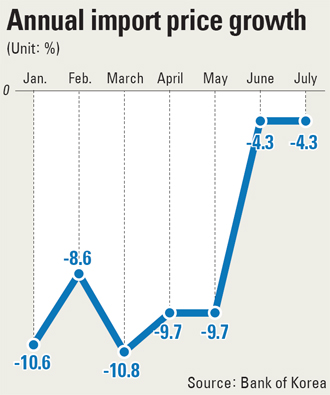 Will the prices of necessities such as food further ease?

As seen recently, consumers are exceptionally sensitive to even the slightest price increase of everyday essentials, although overall consumer growth still hovers at below 2 percent.

Yet many consumers consider food to be a heavy burden, especially with stagnant incomes and an economy trying to get back on track.

According to the Bank of Korea, import prices last month fell 4.3 percent from a year earlier and 0.8 percent month-on-month. That is a turnaround from a slight increase of 0.1 percent from May to June.

Year-on-year monthly import prices have been on a downward spiral for 11 consecutive months after falling 2.2 percent year-on-year last September, the longest decline since the global financial crisis in late 2008. Import prices fell between April 2009 and March 2010.

“When compared to a year ago, international crude prices went up, but overall import prices fell as other raw material prices declined as the won appreciated against the U.S. greenback,” said a BOK official.

Import prices of agricultural goods on average were 7.1 percent lower than a year ago.

Imported natural gas and iron ore were 8 percent cheaper than a year ago.

Meanwhile, export prices fell 1.5 percent from a year earlier. Export prices have been falling for 12 consecutive months, the longest slide since May 2009 to April 2010.