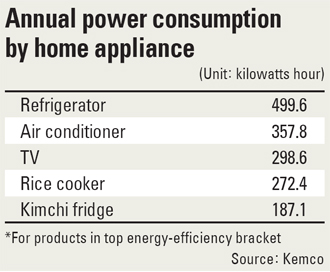 With Dangjin thermal power complex breaking down on Sunday night and many plants experiencing temporary problems due to relentless operation, regular households have to bear a heavier burden of conserving power.

The No. 1 energy-consuming household appliance is the air conditioner, followed by the refrigerator, television and rice cooker.

But there are lots of things you can do to reduce your power footprint.

With the nation still in the grip of a sweltering heat wave, it’s hard to avoid turning on the air conditioner. Instead, energy authorities suggest that you refrain from using other power-guzzling appliances that aren’t as absolutely necessary, such as vacuum cleaners, electric irons, hair dryers or microwaves, especially during the day’s peak power usage period of 2 p.m. to 5 p.m.

An air conditioner uses 357.8 kilowatt hours, making up 25 percent of a household’s power usage during the height of the summer season.

“Air conditioning is the most critical reason that people consume power. It’s not even comparable to other reasons in this season,” said Woo Young-man, a public relations manager at the Korea Energy Management Corporation (Kemco).

As climate change keeps the temperature highs climbing every summer, energy consumption has been skyrocketing. A 1 degree Celsius (1.8 degree Fahrenheit) increase ends up boosting energy consumption by 7 percent. That means setting up the air conditioner one degree higher can make a significant change, he said.

But you don’t need to sweat too much. He recommended running both the air conditioner, with the temperature set higher, and electric fan at the same time. That still keeps the air cool.

An idea that’s been circulating on the Internet of hanging a bag of ice from the fan also makes sense, he added.

Lighting and standby power are the remaining two of the three main energy vampires, in total sucking up 26 percent of total household power consumption. Just turning off the lights in an empty room can save 10 percent of power usage.

You’re better off not leaving rice in the rice cooker to stay warm, and when doing laundry, try to stay away from the dryer function. As many families now watch television via cable services, unplugging the set-top boxes also helps.

According to Kemco, each household can save up to 30 percent of net electricity just by following these simple tips.