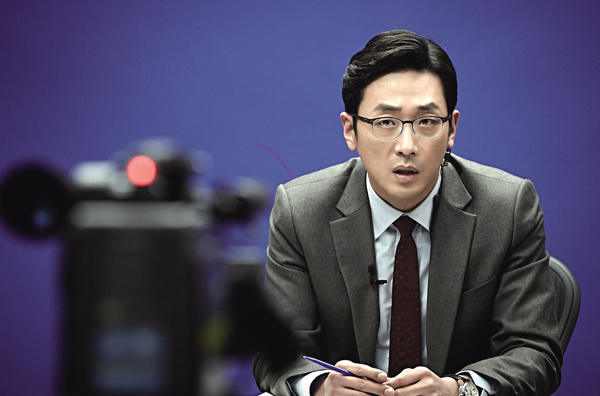 Ha Jung-woo as a news anchor in his hit “The Terror Live.” [JoongAng Ilbo]

That brings its total audience to 6.4 million admissions in just 12 days, or about 46 billion won ($41.3 million), according to the Korean Film Council.

“Snowpiercer” was reportedly made for 45 billion won, making it one of the most expensive Korean movies ever. With presales from 160 countries and territories, Bong’s film already brought in 20 billion won before its release.

The second weekend results were down just 26 percent from its opening weekend, indicating it has some legs, with many cinema experts predicting it should top 10 million admissions.

The No. 2 film last weekend was “The Terror Live,” starring Ha Jung-woo. It pulled in 1.1 million admissions over the weekend, just a 10.7 percent drop from its opening weekend, a stronger hold than “Snowpiercer.”

Together, “Snowpiercer” and “The Terror Live” accounted for 73.7 percent of the entire box office in Korea over the weekend.

Coming in a distant third was the American animated film “Epic,” with 292,440 admissions.

In fourth was director Kim Sung-soo’s new film “The Flu.” Even though “The Flu” does not officially open until Wednesday, projections show the movie having 130,395 admissions.

In fifth and sixth were animated movies, the Japanese film “Detective Conan: Strategy Above the Depths” and DreamWorks’ “Turbo.”