Few heed call to ‘save a cup, save the earth’

Few heed call to ‘save a cup, save the earth’ 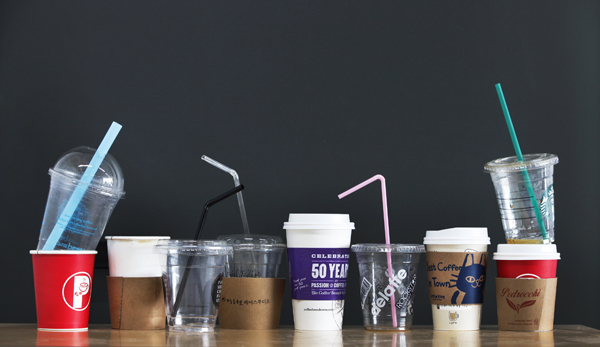 Despite the government’s efforts to decrease the use of disposable take-out cups at coffee shops, the amount has been increasing, according to the Ministry of Environment. By Park Sang-moon

On a recent Saturday afternoon, the Song family from Mok-dong, southwestern Seoul, decided to go for a picnic at Jamwon Hangang Park in southern Seoul, where her 9-year old son and 5-year old daughter can swim in a swimming pool while her husband can still take a little nap “without feeling guilty.” For their picnic, instead of packing homemade sandwiches or gimbap (seaweed rice roll), Song stopped by a supermarket and bought roasted chicken, sushi rolls, assorted fries and all sorts of other food along with disposable cups, plates, forks, spoons, chopsticks, knives, and of course, wet tissues to clean up afterwards as water taps are “too far away.”

“I didn’t want to bother packing stuff and have to go home and clean up afterward on weekends,” explained Song, who said she and her husband are working parents.

“I know you can always bring picnic baskets and use plates and utensils from home but that means I have to do dishes when I get home. Oh, I don’t want to do that on Saturday. I already feel tired thinking about cleaning up after my kids’ wet towels and swimsuits.”

A young couple next to Song’s family brought their own little picnic basket and was drinking a glass of wine from a plastic wine glass.

“We purchased this from Costco. It’s not that expensive and we don’t have to worry about breaking it. It’s plastic and it’s disposable,” said Kim Jin-joo, 24, from Seoul, who often buys plastic wine glasses for such outings. “Isn’t it clever?”

When Song’s kids had enough hours in the water and their stomachs were full, they gathered all their leftovers and disposables in a supermarket plastic bag that they brought the food in and chucked it in a bin at the park and left for home empty-handed. They even left behind an aluminum foil mat they bought from a convenience store at the park to sit on that day.

When this reporter, who was watching them from a distance, ran up to remind them in case they had forgotten it, Song replied, “Oh, we meant to throw it away. We don’t really need it anymore. We don’t really do picnics.”

A few years ago, the Korean government passed a law allowing supermarkets, coffee shops and fast-food franchises to charge consumers between 20 won and 100 won for plastic bags and take-out cups. Because many shop owners were reluctant to follow the law, the government allowed “bong-parazzi” to take photos of supermarkets that give out plastic bags, or “bongji” in Korean without receiving the “environment protection cost.”

However, the bong-parazzi’s rewards were scrapped due to a lack of budget. Some supermarkets still receive the “environment protection cost” for plastic bags, while some don’t, depending on the local governments, the Ministry of Environment said.

“To encourage the use of shopping baskets, which are brought by the customers from home, we scrapped charging for plastic bags at large supermarkets since Feb. 1, 2012,” said an official from the Ministry of Environment.

Korea Broadcast Advertising Corp.’s public advertisements, which are in poster formats calling for the need to decrease the use of disposable products, are seen in subways and on buses. Provided by Kobaco

After criticisms that the campaign has been nominal, the Ministry of Environment signed a more detailed agreement in May, this time with 18 coffee and fast-food chains in Korea.

According to the agreement, the participating coffee and fast-food chains must make efforts to decrease the use of disposable products such as cups, dishes, and utensils by 3 percent compared to the previous year until 2020.

The ministry said it has “strongly urged” other coffee and fast-food chains to participate in this joint agreement, but they’ve refused to do so. For large coffee shop franchises that have refused to participate, the Ministry of Environment said it will talk to the Ministry of Security and Public Administration to include such businesses in its evaluation so that an intensive control is carried on.

Representatives from each business gathered together and signed the voluntary agreement that lists a number of articles to follow and that they’ll disclose those steps to the public.

For fast-food franchises, the articles in the agreement form are similar, but slightly different in discount benefits.

Despite such determination from large franchises three months ago, many coffee chains or fast-food franchises seem to have forgotten about the agreement.

This reporter visited Caffe Bene in Cheongdam-dong on Saturday evening to observe for a couple of hours on how the coffee shop was making efforts to minimize its use of disposable cups.

When the reporter approached the counter to order a Taro bubble tea, she wasn’t asked whether they “may provide the drink in a mug cup if you are having it here.” The reporter wasn’t notified of the discounts that customers can receive by bringing their own tumblers or mug cups.

At 6 p.m., about 30 people were sitting in the coffee shop drinking their beverages. None of them were using the mug cups that are stacked at the bar. They were all using single-use disposable cups ? paper cups for hot drinks and plastic cups for cold drinks. 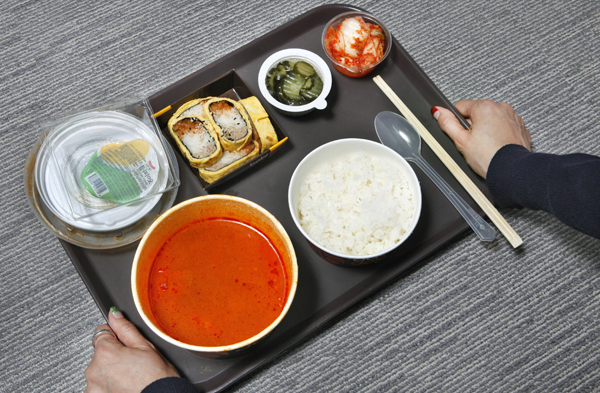 The fast-food hansik franchise Babidabida uses disposable products for all its dine-in and take-out meals. By Park Sang-moon

While some of the fast-food chains signed a voluntary agreement to help save the environment that they are partly responsible for, large restaurant franchises seem to be ignoring the movement.

Shin Young-ok, 58, from Seoul, who regularly visits Yonsei University’s Severance Hospital for medical treatment, was “upset” by her recent visit. The hospital’s cafeteria was recently renovated and new restaurants were added.

When her yukgaejang was served, she was shocked to see that everything on her tray, from chopsticks and spoons to plates and a bowl were all disposable, even though she was having her meal in the cafeteria.

“I couldn’t believe it. What are they (the business owners) thinking?” said Shin. “It only tells me that such a company doesn’t care about the environment. If I knew that I was going to be served in disposable products even though I was having my meal at a cafeteria, I wouldn’t have purchased it.”

Shin said as she went over to the counter to return her tray with dirty disposable plates and bowls piled up, she was stunned to see how much rubbish one person was making from one meal.

“I guess they are calling this fast-food and using disposable products. But when I eat at McDonald’s, I only leave behind one hamburger wrap, a french-fries packet, a cup and a straw. But there…,” Shin said as she shook her head in disbelief.

“Babidabida” is a hansik franchise by LG Ourhome that entered into the market in late 2010 to compete with CJ Group’s Bibigo. It first opened a branch in Sinsa-dong in southern Seoul and has been opening few more branches in Seoul and other parts of the country.

Not only at Severance Hospital but all the other branches of Babidabida as well as Yakistar, a Japanese style fried noodle and rice franchise restaurant that’s always located next to Babidabida, use disposable products for both dine-in and take-out meals.

“It’s depressing to hear such restaurants that don’t seem to care about the environment can open up a business today,” said Lee Sae-gul, an official from the Environmental Movement Association. “The government has strengthened its agreement from the previous one. There’s a monitoring sector and the businesses that don’t abide by the agreement can get disqualified. But at the same time, it is true that it doesn’t seem to work properly at the scene.”

According to Lee, the public’s “spontaneous participation will be the most effective way to decrease the use of disposable products” and it is “up to the government to stimulate the public to be aware of the environmental issues.”

However, Lee agreed that while Koreans’ cultural level is high, “it’s just that some of them have not yet thought about it.”

Seo Jeong-ah, 32, who recently got married and decorated her new house, purchased an espresso machine for her home and bought a bulk of disposable cups.

“I wanted to feel like drinking a take-out coffee from a coffee shop even though it’s a coffee from home,” said Seo, explaining why she drinks coffee from a disposable cup at home. “I never thought about it that way up to this point that I am wasting resources and not being of any help in improving the environment. I feel ashamed.”

Meanwhile, Song Ji-min, 38, says she used to take tumblers to coffee shops but decided not to since about two years ago as the “employees gave me an impression that I am being a nuisance for giving them a tumbler that needs to be washed before pouring drinks.”

“Once, I asked an employee at the counter of a coffee shop to rinse my tumbler as I would like to have my coffee in it. He took the tumbler without saying a word and didn’t even rinse it properly and just gazed at his co-worker with an expression that I was being annoying. Since then, I don’t use tumblers,” said Song. “I know the consumers have to make efforts to carry our own tumblers or mug cups for the sake of the environment, but the owners of coffee shops must train their workers beforehand.”