Yesterday marked 20 years since Korea implemented the so-called real-name financial transaction system under the Kim Young-sam administration to help prevent illegal activities such as bribing and money laundering. With the passing of time, there have been questions raised over the effectiveness of the system and whether there needs to be an overhaul to banning financial transactions using borrowed names.

However, opponents say financial trading using someone else’s name has long been part of everyday life and that amending the law would bring huge confusion to ordinary people.

For example, Busan Bank recently released a new installment savings account product that allows family members and friends to set aside money for future travel by having them put a certain amount each month into an account owned by one person.

“We launched the product based on the idea that many people collect money in one savings account for special purposes like traveling or social gatherings,” said an official from Busan Bank.

Based on the fact that the account owner and those who actually carry out financial transactions are different, the account could be seen as a borrowed-name bankbook.

Also, a 42-year-old surnamed Choi, an executive at a large company, has saved a total of 90 million won ($80,711) in two accounts at a savings bank - one under his name and the other under the name of a family member. After experiencing the savings bank crisis two years ago that led to bank runs, Choi dispersed his deposits so that each account holds less than 50 million won. Under law, when a savings bank goes bankrupt, the government guarantees deposits of up to 50 million won. 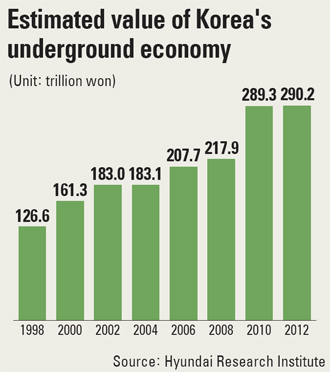 “I was concerned that if I saved more than 50 million won in one deposit under my name, then I wouldn’t be guaranteed for deposits exceeding 50 million won [if the savings bank goes bankrupt],” Choi said.

The second account that contains 40 million won under Choi’s family member’s name could also be seen as a borrowed-name account.

It is often the case that financial transactions using borrowed names are thought to have been conducted mainly by large companies, politicians or big asset holders to avoid taxes and to secure slush funds. However, financial trading using borrowed-name accounts is common among ordinary people. Some parents open a bank account under their child’s name and put in money every month. Also, some parents manage the salaries their grown-up children receive every month.

While the regular National Assembly session is scheduled to take place in September, both ruling and opposition lawmakers are introducing bills that would ban any kind of borrowed-name transactions.

The real-name financial transaction law punishes financial institutions for not having thoroughly checked the real names of their clients and those that stole others’ names. However, the law does not ban the opening of bank accounts using other people’s names if they have been mutually agreed upon.

“The two recent incidents that involve the creation of slush funds by a large company and former president are similar in that they both utilized borrowed-name accounts,” said Kim Jae-jin, a senior researcher at Korea Institute of Public Finance. “If the law allows borrowed-name financial trading, the government’s efforts to normalize the underground economy will be limited.”

Meanwhile, the financial sector is concerned that amending the law would bring massive setbacks.

“Ninety-nine percent of borrowed-name transactions aren’t malicious,” said an official from the banking sector. “If they are banned by law, then those 99 percent of financial traders could experience inconvenience because of only a few cases involving illegal activities.”

The country’s financial authority also remains cautious about the law.