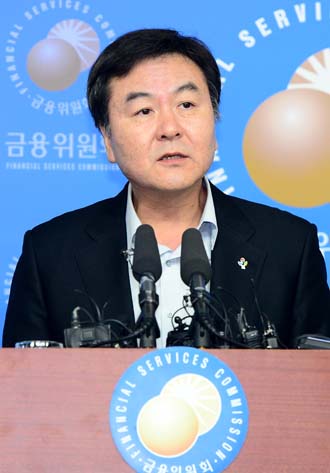 Shin noted an example of how recently there has been a tendency for foreign financial companies to scale down operations in Korea.

“Fundamentally, such moves would be the result of a company’s global operation strategy, but it could have been the case that there was a problem in our financial industry and the authority, which could be an unpleasant signal, externally,” Shin said. “The financial regulator should look back on whether it was simply observing the changes.”

Many foreign financial companies, including banks and brokerages, have scaled down their businesses in Korea or even withdrawn, and there has been criticism that the policy overseeing the financial industry is very strict.

Shin yesterday pointed to the lack of aggressiveness and willingness of financial officials when it comes to dealing with foreign financial companies’ businesses.

“There has been criticism that the financial authority isn’t responding to foreign financial companies asking questions about product development and authorization procedures,” Shin said. “If we keep putting off our work, then the competitiveness of our financial industry will keep weakening.”

The FSC chairman also touched upon Korean financial companies and their setbacks when entering overseas markets because of lack of support from the financial authority.

“I would like to point out that the financial authority has only words and no aggressive actions,” he said. “There are questions being raised as to whether the authority is actively supporting financial companies to reach overseas markets.”