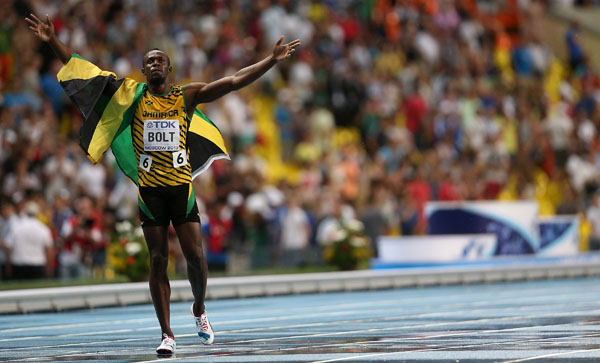 Usain Bolt of Jamaica celebrates after the men’s 100-meter final at the 14th IAAF World Athletics Championships at Luzhniki Stadium in Moscow, Russia on Sunday. Usain Bolt won the title in 9.77 seconds. [XINHUA/NEWSIS]

MOSCOW - His legs were hurting, the rain was pouring and he was trailing late in the race.

Doesn’t matter. This is Usain Bolt.

And nothing gets in the way of him and first place, especially when he’s driven as he was Sunday in the 100-meter final at the world championships.

Bolt blew by Justin Gatlin with about 30 meters to go and never glanced back. He also didn’t even crack a smile when he crossed the finish line because this took a lot more work than the world’s fastest sprinter usually needs.

Of all Bolt’s titles, this one will have a special meaning, considering he false-started two years ago in the final to lose his crown.

Many of Bolt’s top rivals were missing from the field. Gone were Tyson Gay (doping offense) and Jamaican teammate Yohan Blake, who was the reigning champion but skipped the worlds because of an injured hamstring.

Shortly after the race, Bolt sauntered around the track with his country’s flag tied around his neck like a cape. These days, he has to be the Superman of his sport. Given all the recent doping scandals, track needs someone to save the day.

For now, he will settle for blowing away the dark cloud over his proud sprinting nation, which saw some of its most decorated sprinters fall from grace. Asafa Powell, Sherone Simpson and Veronica Campbell-Brown all tested positive for a banned substance and weren’t at the worlds.

“I’m just doing my part by running fast, winning titles and letting the world know you can do it clean,” Bolt said. “My focus is to continue doing what I do.”

And that means running fast times, even on a drenched track.

What started as a steady drizzle turned into a downpour just before the gun sounded. So much so that Bolt clowned around when he was introduced to the crowd, pretending to open an umbrella.

Really, though, rain doesn’t bother him. Not in the least.

Neither does anything else, like falling behind early. He knew he might trail Gatlin at the halfway mark, because Bolt has never been a good starter and may have been extra cautious considering what happened in South Korea two years ago.

In the lane next to him, Gatlin got off to a great start and thought he might have enough in the tank to beat Bolt, just as he did two months ago in Rome.

“Then I saw these long legs coming up on my right side,” Gatlin said. “He’s great. He’s just great.”