GM may be doing U-turn on Korea-hub strategy

GM may be doing U-turn on Korea-hub strategy 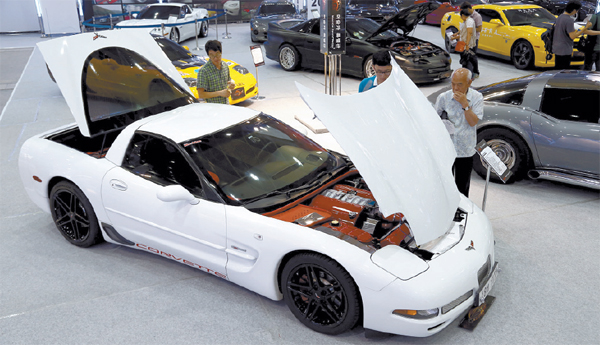 Attendees look over a customized 2001 Chevrolet Corvette at the Seoul Auto Salon 2013 on July 11. [BLOOMBERG]

General Motors has begun gradually cutting its presence in Korea after mounting labor costs and militant unionism triggered a rethink of its reliance on the country for a fifth of its global production, three individuals familiar with GM’s thinking said.

The U.S. automaker’s plan, which already appears to have been put into action with recent decisions to shift production of newer models away from Korea, highlights complaints from local and foreign carmakers about rapidly rising wage costs in the world’s seventh-largest exporting nation.

“We need to make sure we mitigate risk in [Korea], not over the next 2-3 years but over time, not to become too dependent on one product source,” said one source who declined to be identified due to the sensitivity of the matter. “If something goes wrong in Korea, whether it is cost, politics or unions, it has an immediate impact.”

GM made Korea one of its main production hubs after its 2002 purchase of failed local carmaker Daewoo Motors. The country accounts for 20 percent of GM’s annual global production of 9.5 million cars. More than 80 percent of GM cars made in the country are exported.

The sources, all privy to high-level discussions inside GM about the future of its Korean strategy, said labor costs had risen sharply over the past decade, turning the country into a high-cost base - a problem exacerbated by the Korean currency’s relative strength over the past year.

“Our view is that management is making threats to pressure us and make us cooperate,” union spokesman Choi Jong-hak said.

However, some union leaders said they fear an eventual shuttering of some GM factories in the country.

GM told its Korean labor union late last year it would not produce the next-generation Chevrolet Cruze, a compact car, in Korea, though it indicated it planned to continue to produce the current model here as a lower-cost strategic car for emerging markets. It has not specified where it expects to make the new car, though Spain is rumored to be the choice.

Two individuals familiar with GM’s product-development plans said the automaker had also shifted the Cruze’s lead development team out of Korea to its technical center near Detroit.

The company has similar plans for the Opel Mokka, a subcompact SUV it makes in Korea and exports to Europe as the Mokka and to China and the United States as the Buick Encore. GM said it planned to shift a large chunk of production of the car’s redesigned model to Spain from the second half of next year, initially using kits brought in from Korea. GM Korea would keep producing its current model in Korea.

For much of the past decade, GM Korea has been a successful venture. It combined GM’s global reach with the former Daewoo’s small car technology, which GM lacked. Daewoo’s technology played a key role in powering GM for a relatively quick comeback from its bankruptcy in 2009, allowing the Detroit-based automaker to make inroads in China and other high-growth emerging markets.

But wages have been surging. At GM Korea, the labor cost per vehicle is set to hit $1,133 this year, according to a slide presentation management gave to the union over the past year, said a union official who attended the presentation. That compares to an average of $677 per vehicle across GM’s international operations.

The sources said that GM Korea’s per-vehicle labor cost was on par with Spain and Russia, or “the lower end of the scale of what GM considers as a high-cost country,” one said.

The manufacturing sector’s total labor-compensation per employee in Korea jumped 119 percent in the 10 years through 2009, compared to a 40 percent rise in the United States and a 27 percent gain for the euro zone, according to data from the Organization for Economic Cooperation and Development.

Now, combined with a stronger won and the recent bout of geopolitical tensions on the Korean peninsula, GM believes its risk-exposure to Korea has become excessive and needs to be “rebalanced,” one of the sources said.

GM Korea’s labor union believes Korea is still a competitive base for producing quality cars for sale at competitive prices. “Korea has an edge in cost compared with the likes of Australia and Germany,” said Choi.

Last month’s wage settlement came after partial strikes by GM Korea’s blue-collar and white-collar workers, which followed the union’s worst walkout in a decade last year. That strike resulted in a production loss of 48,000 vehicles or $92 million, according to GM Korea.

Labor strikes have not been confined to GM in Korea. On Friday, union delegates representing workers at the country’s biggest carmaker, Hyundai Motor, voted to strike. Hyundai workers represented by the union will vote tomorrow whether to go ahead with the strike.

GM is especially concerned about union legal action seeking to redefine the meaning of “regular wage” in Korea, which the sources say is by far the biggest potential threat to GM Korea’s continued competitiveness.

A high court in Korea court ruled last year that regularly paid bonuses should be counted as part of a workers’ “base pay,” which is used to calculate overtime and pension payments. The supreme court is reviewing the ruling. Reuters