Civil servants sweat it out to stave off power crisis

Civil servants sweat it out to stave off power crisis 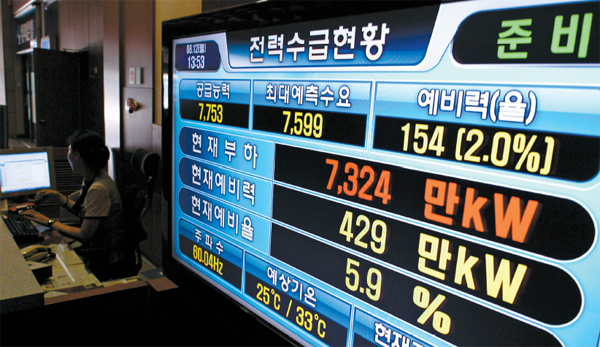 An employee works in a dark office yesterday at the main building of Korea Power Exchange in Samseong-dong, southern Seoul. The Ministry of Trade, Industry and Energy ordered all public institutions to turn off lights from yesterday through tomorrow as part of a last-ditch effort to prevent blackouts. [NEWSIS]

On the hottest day in summer, known as malbok in Korean, government officials working in the Gwacheon Government Complex in Gyeonggi had to eat samgyetang, or chicken soup, as they sweated much more than usual without air-conditioners and fans due to brief power outages at local restaurants during lunch hour yesterday.

The power cut was no surprise to government officials or employees at public institutions, who have to endure mandatory power shutdowns at their workplaces at least three days this week.

Korea yesterday barely overcame the most urgent moment so far this year, owing to the government’s last-ditch efforts to shave power consumption at public entities in order to prevent a level 4 warning from being issued.

The nation’s power authority initially forecast the power situation could reach level 4 between 2 p.m. and 3 p.m. yesterday as the power reserve was expected to fall below 1.6 million kilowatts with temperatures hovering around 33 degrees Celsius (91 Fahrenheit). 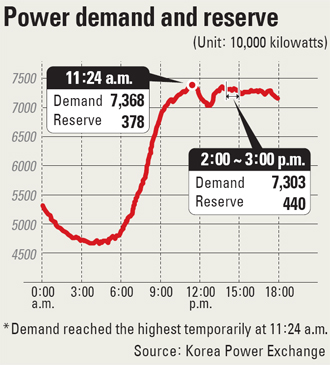 The Korea Meteorological Administration issued heat warnings in most cities across the country, with Daegu recording the highest temperature of 37.9 degrees Celsius.

However, thanks to unprecedented government-led efforts to conserve, the power reserve remained over 4 million kilowatts during 2 p.m. to 5 p.m.

“We could save about 2 million kilowatts in reserve, equivalent to the production of two nuclear power plants, owing to the government, industries and people’s efforts,” said Cho Jong-man, chief of the central control office at the exchange.

Most office rooms, corridors and bathrooms at public corporations and ministry buildings were dark even during the afternoon as they were told to turn off all lighting.

“I don’t know why we have overcome this so far, “ said a senior manager at Korea Gas Safety Corporation. “Employees are having a hard time without lights and fans, which we have never expected. We might need a candle, but it is so hot.”

Until yesterday morning, the power situation was so serious that the government banned operation of air-conditioners and cooling systems at all public institutions nationwide.

The Ministry of Security and Public Administration called on local governments to join the effort to cut power consumption.

The Ministry of Trade, Industry and Energy also said it will prohibit the use of all air cleaning and cooling systems at its affiliated institutes through tomorrow.

Including the ministry building, all lights inside the buildings of public entities, except for stairs, will be turned off.

“From Monday through Wednesday this week, they country is facing its largest crisis in power demand and supply,” said Energy Minister Yoon Sang-jick at an emergency meeting yesterday.

He appealed to the general public and institutions to cooperate in overcoming the crisis.

Public institutes that have their own power generators with capacity of more than 500 kilowatts were asked to use them from 2 p.m. to 6 p.m., the energy ministry said.

Government officials will clamp down on private stores this week, too.

Through tomorrow, energy ministry officials will raid shops and crack down on excess use of air-conditioners.

Private buildings branded as energy guzzlers will also be tested to see whether their temperatures are below 26 degrees Celsius.

Some businesses joined the government’s move. Kumho Asiana Group said yesterday it began operating its own generators at major office buildings and plants with a goal of cutting 200,000 kilowatts of power through Friday.

Government branches had to take action at an unprecedented level due to growing worries about a repeat of the massive blackout of September 2011.

Adding to the woes, two coal-fired power plants in South Chungcheong stopped abruptly yesterday, while six of 23 nuclear power plants are offline due to a series of corruption scandals involving counterfeit parts.

The No. 3 coal-fired power plant in Dangjin capable of generating 500,000 kilowatts suddenly stopped Sunday night due to breaks in its turbine. The plant is expected to resume operation next week.

The No. 2 plant in Seocheon also was briefly shut down in the morning because of problems in a water pump. It was restarted but can produce only half of its total capacity (200,000 kilowatts).

Being aware of the possible power crisis, the Nuclear Safety and Security Commission yesterday approved resumption of Hanwool-4 reactor with a capacity of 1 million kilowatts. The reactor has been offline since September 2011 due to breaks in its steam generator.

Over the weekend, citizens faced rising threats of a possible blackout again as power was cut off Sunday night at several residential areas in Seoul.

Residents of a 400-apartment complex in Dongjak District, western Seoul, suffered a power outage for about five hours starting at 9:40 p.m., Sunday, due to problems in low-voltage circuit breakers.

About 100 apartments in Seongbuk District, northern Seoul, experienced a 20-minute power cut at 8:35 p.m. on the same day due to overloads at transformers triggered by a spike in the use of air conditioners.

People also are at increasing risk of sunstroke during the continuing heat wave. In Busan, with a heat warning issued for the eighth consecutive day, there have been cases of senior citizens falling. According to police, at least two elderly persons collapsed while walking on the street during the weekend.

A 77-year-old woman surnamed Lee died on Sunday after she was found with a high fever on the street and moved to a nearby hospital.

According to the JoongAng Ilbo, Lee lived alone in Geumjeong District, one of the hottest areas of Busan.