Defector speaks out on gulag horrors

Defector speaks out on gulag horrors 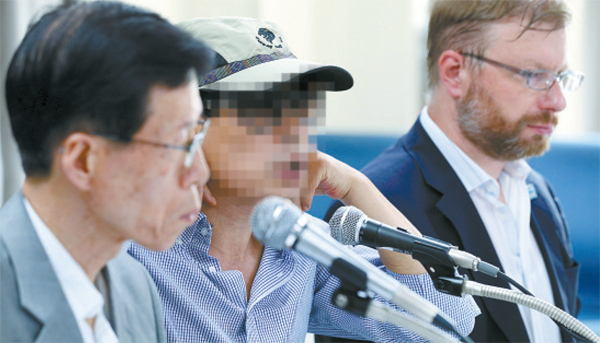 At the National Human Rights Commission of Korea, central Seoul, a North Korean defector talks about the atrocities he witnessed in a gulag. By Choi Seung-sik

A North Korean defector who did time in one of his country’s infamous gulags has spoken out about the horrific human rights abuses he witnessed in the camp, such as systematic executions.

Cho Cheol-min (a pseudonym used to protect relatives remaining in the North) escaped to the South with his family in 2009. He had been in a labor camp in Hoeryong, North Hamgyong Province between July 1997 and July 2000. He held a press conference yesterday at the National Human Rights Commission of Korea in central Seoul, wearing a hat and sunglasses to conceal his identity.

Cho, 56, had been put in the camp because of his “mistaken political beliefs.” “From May 1998 until the late 99, I witnessed organized and systemic secret executions of inmates by the labor camp supervisors,” the defector said before a throng of reporters.

Cho said he was tasked with putting bodies in bags and taking them to a nearby mountain for cremation. He said executions took place three times a month. Each time, he said, there would be three to 10 inmates killed based on accusations that they held incorrect beliefs or had been otherwise disobedient to the state.

“Those who complained about the hard labor at the gulag or those deemed politically erroneous were strangled to death with a strap,” said the former inmate.

Cho estimated about 200 to 300 were executed over the year-and-a-half period he was tasked with the cremations. The defector claimed that a security officer (in charge of the executions) showed him a document written by former leader Kim Jong-il ordering officials to get rid of inmates “regardless of their social rank” outside of the gulag if their “brains are ill” with mistaken political beliefs.

Yesterday’s press conference was attended by Greg Scarlatoiu, executive director of the Washington-based Committee for Human Rights in North Korea.