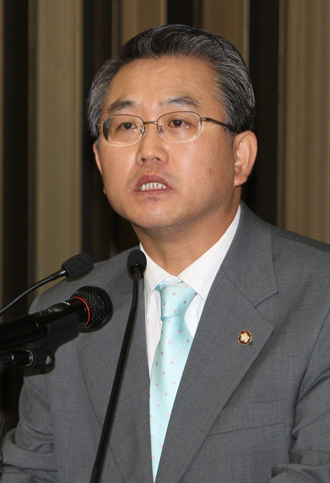 A two-term former lawmaker of the Democratic Party appears to have jumped into the Han River in the early hours of yesterday morning, after being questioned by prosecutors over his alleged role in a 500 million won ($449,000) bribery scandal.

“I have not lived up to the responsibility placed upon me with love ... I can’t express how sorry I am to the Democratic Party and its members,” he wrote.

“We found Kim’s shoes on a yacht dock, so we are speculating he jumped into the river, as it’s common for suicides to leave their shoes before a jump,” said a police officer involved in the search efforts at Bangbae Police Precinct.

The 50-year-old former lawmaker’s black Hyundai sedan was found in a parking lot for the water park at Seorae Island in Seocho District, southern Seoul.

He also left a suicide note stuck to the door of his house.

The apparent suicide attempt came a day after he was questioned by prosecutors for his role in what was supposed to be the delivery of 500 million won in kickbacks from a bio venture firm to a senior official at the Financial Supervisory Service in 2011.

The FSS official, identified by his surname Yoon, was arrested last month for allegedly taking the money in exchange for using his influence to help the firm, K-Stemcell. Yoon has denied the charge.

During the four-and-a-half-hour grilling at the Seoul Southern District Prosecutors’ Office on Sunday, Kim testified that he in fact had taken the money instead of delivering it to Yoon, as requested by the firm.

The professor-turned-politician served as an advisor to the company, which was formerly headed by Ra Jeong-chan, who he attended Shinheung High School in Cheongju, North Chungcheong with.

Kim reportedly exercised his right to remain silent during the probe after confessing to intercepting the money. Prosecutors eventually released a Yoon from custody.

“Kim declined to make statements after he expressed his apologies to Yoon and his family for causing trouble,” a prosecutor involved in the case was quoted as saying by Yonhap.

A graduate of Seoul National University with a degree in law, Kim was elected as a member of the then-ruling Uri Party, the predecessor to the current Democratic Party, in 2004. He represented Jeungpyeong, Eumseong, Goesan and Jincheon counties in North Chungcheong.

Kim was reelected in 2008 but lost his seat in September 2009 after being convicted by the Supreme Court of receiving 200 million won from a local construction firm in 2003, when he was a law professor at Dankook University.

Kim was sentenced to one year in prison and was released on parole in July 2010.

Seeking to resurrect his political career, Kim has led the DP’s North Chungcheong headquarters since May of this year.