Just a friendly, but pressure’s on

Just a friendly, but pressure’s on 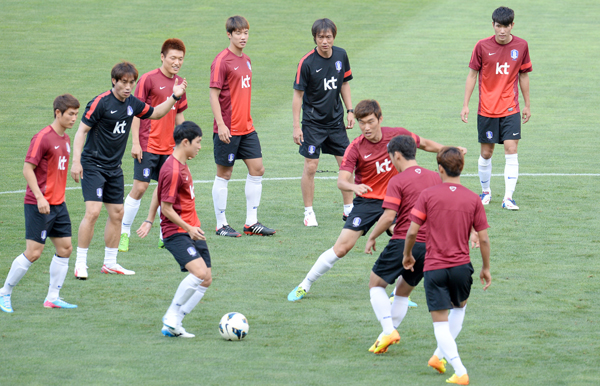 Hong Myung-bo said that he will be mindful of the pressure to win when he leads Korea’s national football team in a friendly match against Peru tonight.

In the buildup for the 2014 World Cup in Suwon at 8 p.m., the 44-year-old coach has another chance to get his first victory after a mediocre debut at the East Asian Cup last month. Korea finished third in the four-nation tournament with two losses and a draw.

If he fails, Hong will be the first manager since 2000 that has not won in his first four matches at the helm of the Korean national team. Guus Hiddink, Hong’s mentor and the manager of the semifinalists of the 2002 Korea-Japan FIFA World Cup, got his first win for Korea in his fourth match. Hong’s much-criticized predecessor, Choi Kang-hee, won his first match at the helm of the Taegeuk Warriors.

When he announced his 20-member roster for the Peru friendly last week, the former Olympic coach, who signed a two-year contract as the national team coach in June, said that he cares more about streamlining his team in the run up to the World Cup, rather than winning every game.

He summoned players only from the domestic league or Japan for the East Asian Cup, leaving Europe-based players with their clubs. He repeated that pattern against Peru.

But, he admitted that he feels public pressure.

“It does not make sense that the coach of the national team does not care about the results,” Hong said yesterday while training the players at Suwon World Cup Stadium, the venue of tonight’s match.

“Everything is said through the results. If the national team keeps slumping, we can lose trust of fans,” he said.

However, the coach said that building trust with the players will also be his priority. He said that allowing Japan the winner in the 5-minute injury time during Korea’s final match at the East Asian Cup, which resulted in a 2-1 loss, was due to his players’ lack of experience in the closing minutes of a match, when they lose focus.

“Our players are young and need experience. This is also the moment where they can gain experiences,” Hong said.

Peru is ranked 22nd in the world by FIFA, 34 notches ahead of Korea. This is just Korea’s second match with the La Blanquirroja after a 4-0 loss in 1971. It has come with a strong team, led by overseas stars such as captain Claudio Pizarro of Bayern Munich, Paolo Guerrero, a forward for Brazil’s Corinthians, the reigning FIFA Club World Cup champion, and Jefferson Farfan, a striker for Schalke 04.

“I think Peru is an optimal opponent as they are a stronger team than us,” Hong said. “Our players came off of playing in the K-League and are tired and weary, but I think they will give their best tomorrow.”

Hong said that he will focus his six substitutions on the front line.

“Among midfielders, I will have to see how much Ha Dae-sung and Lee Myung-joo can hold out. If there is no additional problem to especially address, I am considering replacing the players on offense.”