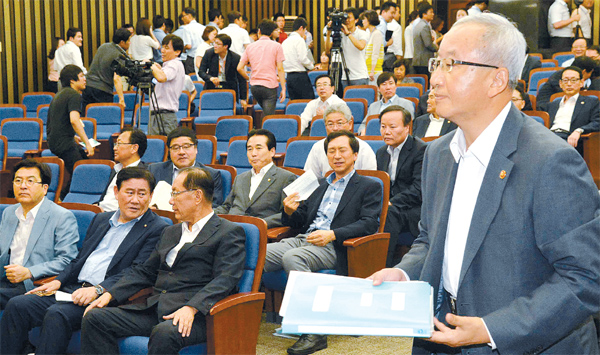 Hyun Oh-seok, right, deputy prime minister for the economy and finance minister, walks to a podium yesterday to present a revised tax reform plan to a policy coordination meeting with ruling party lawmakers at the National Assembly in Yeouido, Seoul. [NEWSIS]

The government at least partly surrendered on a new tax plan that was going to raise tax bills for a major section of the middle class, saying a new version will only affect people pulling in more than 55 million won ($49,288) a year.

The threshold was moved up from the 34.5 million won announced just last Thursday.

The announcement was made a day after President Park Geun-hye told her finance minister to review the tax reform plan for 2014 as public discontent grew and the opposition exulted over having a new cudgel to pummel the administration with.

“Due to mounting concerns about the increased tax burden, the ministry has made an amendment to the latest tax reform plan,” said Hyun Oh-seok, finance minister and deputy prime minister for the economy, at a press conference yesterday. “There was an order from the president to review the plan in a way to take care of the working- and middle-class people.”

The ministry and ruling Saenuri Party lawmakers pounded out an agreement. 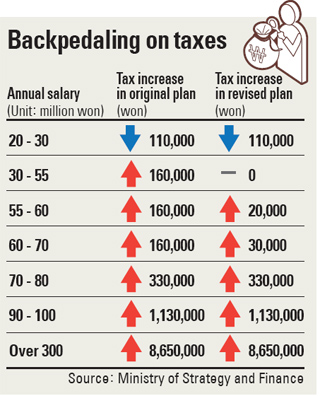 “We asked the ministry to find measures to pacify people offended by the plan, such as cutting taxes on working-class people and not increasing taxes on the middle class,” Choi said.

According to the original plan announced last Thursday, 4.34 million workers who earn more than 34.5 million won a year would have had to pay at least 160,000 won more in income tax starting in 2014.

The Park Geun-hye administration and the Finance Ministry came under heavy fire from both politicians and economic analysts after it announced it would do away with some tax credits to boost revenues, increasing taxes on the middle class.

“Considering that households with annual incomes between 55 million and 70 million won are spending a lot on medical and educational expenditures, the ministry decided to slash increases in their income taxes,” the minister said.

In fact, the ministry decided to increase tax credits for those people in order to make them feel they are paying less taxes.

A total of 2.29 million people will be able to receive increased credits as the ministry is going to raise the upper cap on income tax credits for people who earn less than 55 million won from the current 500,000 won to 660,000 won.

The ministry had planned to raise an additional 48 trillion won in tax revenue to help pay a total of 135 trillion won for the president’s welfare pledges.

By revising the plan yesterday, it’s estimated that the government will raise 300 billion won less than it planned last week.

The median income for Korea is 37.5 million won.

The opposition Democratic Party remained critical of the newly-formed plan.

“The revision is a temporary solution that just played with numbers and deceives the people,” said Park Yong-jin, spokesman of the party.