President’s economic team is on the ropes

President’s economic team is on the ropes 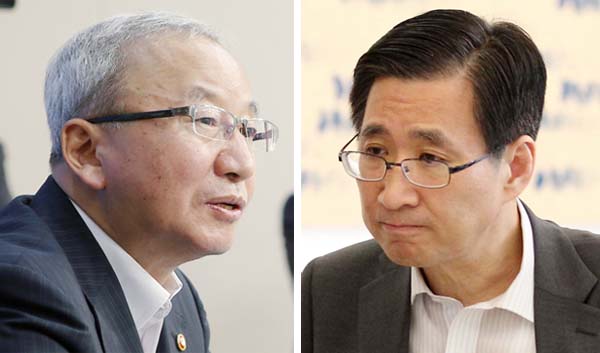 Rumors are that Park’s economic team, including Blue House Adviser Cho Won-dong and Finance Minister Hyun Oh-seok might be sacked due to the recent blunder.

The opposition Democratic Party has been demanding that the economic team be replaced with people who would look after the middle and lower classes instead of the current team that tried to increase the tax burden.

“The tax reform, which the Park government has said it would review from square one, should actually make changes from the very beginning,” Kim Han-gill, Democratic Party leader, said yesterday. “Asking the same economic team that made the first tax reform to make an entirely new tax reform is just asking too much.”

About a month ago, it seemed Hyun would serve as the finance minister for a long time as Park reaffirmed her confidence on her top economic policy maker. Early last month, even the ruling Saenuri Party, which usually backs up the president’s chief economist, questioned the finance minister’s leadership as well as his understanding of the economic situation. The economic team has been considered too optimistic and out of touch.

Many have believed that while the public has been burdened by slow economic growth, Hyun’s economic team persistently claimed that economic indicators were signaling that things were improving.

Yet the president’s unyielding confidence erased any doubts and empowered the economic team to push forward with its agenda.

“I believe he has been doing a good job considering it’s only been less than four months since he was able to do his job properly, as the launch of the new government was delayed,” Park said during a cabinet meeting July 23 at the Blue House. “In the second half, I hope he will do a better job as an economic control tower so the public can actually feel the change.”

In a meeting with leaders of the Saenuri Party, Hyun and other officials from the Finance Ministry reportedly claimed that the world would appreciate their good job on tax reform. Although admitting they failed to win public support due to a lack of promotion, they said politicians should give the tax reform proposal more time.

“Throughout the meeting they were very aggressive and asked what they had done wrong, and this really startled us,” said a Saenuri official.

But the situation quickly turned around as the middle-income class resistance to the tax reform grew stronger than the government expected.

Public anger was further fueled when Cho, the Blue House economic affairs secretary, said the tax reform was designed in the way that the burden wouldn’t be felt much and reap maximum results. He added that the increased tax payment for individuals was bearable.

This prompted white-collar office workers to consider joining the opposition party in their massive protests against the government.

“I was a supporter of President Park and voted for her in the last election,” said a 38-year-old office worker. “The tax reform announcement felt like a stab in the back. To them, the increased amount may seem not much like a burden, but when your salary hasn’t gone up because the company that you worked for shut down because of the recession while you’re burdened by debt and other expenses such as child support, even the slightest increase in taxes is something you can’t just call ‘bearable.’?”

It was said that such a movement by the middle-income class prompted the president to take action and demand a revision to the tax reform, especially since it could affect the outcome of the local election next year.

“In the last meeting, we asked the government to make changes since the tax reform could add a burden on the middle-income class, but it seems the economic team was not complacent,” said a Saenuri Party official. “According to economic statistics, those who make 34.5 million won ($30,920) a year may be considered middle income, but it’s far different from what the people think and feel.”

The main reasons the Finance Ministry has pushed tax reform is to secure finance needed to realize the 135 trillion won welfare pledge Park made during the presidential race last year.

Since the beginning of the year, various government agencies including the National Tax Service have stepped up efforts to fill up the government coffers by tightening their investigations on any potential illegalities, including offshore tax dodging.

But as complaints from the business community about intensified tax audits peaked, the tax agency announced it would reduce the number of companies under investigation.

The government’s biggest concern was how to finance the welfare promises at a time of shrinking tax collections and company earnings.

According to Democratic Party lawmaker Ahn Min-seok, citing National Tax Service data, the amount of taxes collected in the first half of 2013 was the lowest in three years.

Ahn, who is on the National Assembly’s Strategy and Finance Committee, said 92 trillion won in taxes was collected in the first half. This is 9.3 percent, or 9.4 trillion won, less than the same period last year. Between January and June 2012, a total of 101.5 trillion won in taxes was collected. Corporate tax in the first six months of the year shrank 16 percent year-on-year, while added value tax dropped 8 percent year-on-year as consumers tightened their purse strings.

The Finance Ministry has also been attacked for ineffectively promoting the tax reform.

Last week during a press briefing, when asked why the tax credit ceiling was set at an annual income of 34.5 million won, the government’s only response was, “These are people who are within the top 28 percent by annual wage.”

“These are issues that need about two to three years to be adjusted,” said Kim Woo-cheol, a taxation professor at the University of Seoul. “They rushed in too fast.”

A Saenuri Party official said the biggest problem is promotion and the attitude of the current government that it has done nothing wrong.

“The claim that this is not an additional taxation is just nonsense in the view of the middle-income class,” the party official said.

Some experts claim the biggest problem is how Park runs the show.

“Currently, President Park is getting high approval points on her diplomatic and security handling,” said a high-ranking Saenuri official “However, this is only temporary and her ruling foundation can only be solidified in the long run when the economy is revived.” The high-ranking official said it remains to be seen whether the current economic team has the leadership or vision to deliver.