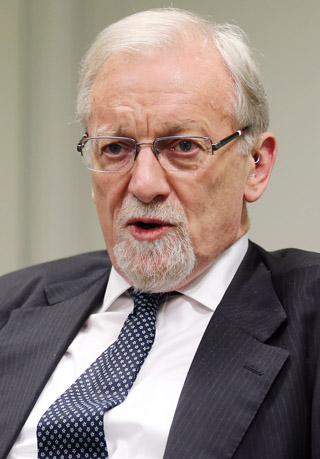 Though some South Koreans responded to the North’s nuclear threat by claiming that the South should also obtain nuclear weapons, Gareth Evans, a former Australian foreign minister, emphasized that such an action will not be beneficial to the country and will only contribute to international proliferation.

“South Korea is under the U.S. nuclear umbrella and has no reason to possess nuclear weapons,” said Evans, 69, chancellor of Australian National University, in a round-table seminar on the global nuclear crisis at the Australian Embassy in central Seoul recently.

Evans, author and editor of books and articles on foreign relations, politics and human rights, served as Australia’s foreign minister from 1988 to 1996 and previously as minister for resources and energy, and transport and communications. He also served after leaving parliament as president of the International Crisis Group and was cochair of the International Commission on Nuclear Non-Proliferation and Disarmament.

“It is very important that policy makers, not only in the nuclear-armed states themselves, but the allies of those states, including South Korea, including Australia, including the Europeans, are seriously committed to the disarmament agenda as well,” he told the JoongAng Ilbo after the seminar.

“If the allies keep dragging back the U.S. and others from going down this particular path because they are nervous about their own security, frankly, we are not going to see any kind of momentum developing.

Evans recently released a report, a collaboration between the Center for Nuclear Non-proliferation and Disarmament and Australian National University, entitled “Nuclear Weapons: The State of Play.” It describes the progress on the commitments and recommendations of the 2010 Review Conference of the Parties to the Treaty on the Non-Proliferation of Nuclear Weapons, the 2010 and 2012 Nuclear Security Summits and the 2009 report of the International Commission on Nuclear Non-Proliferation and Disarmament.

“The recommendations and questions are all designed to move the world towards eliminating nuclear weapons and in the meantime stopping the proliferation of such weapons,” said Evans. “We all know psychologically that so long as any states retain nuclear weapons, other states are going to want it. The story we tell is not a very happy one, and we hope it will be a wake-up call for the international policy community.”

He also said, “What we do know is that we can move systematically and seriously towards a dramatic reduction in the numbers of nuclear weapons, way down below the 18,000 nuclear weapons that are out there in the world’s stockpiles at the moment.”

He said that the deployment of those weapons could be “dramatically reduced” and that nuclear states’ doctrines in the sense of their reliance on nuclear weapons can be changed.

“If you put all those together, the world will be a lot safer and saner than it is at the moment,” he said. “We will still have the task of moving from there to a world where nuclear weapons were completely outlawed and completely abolished, and we know that last stage will be very difficult because there are psychological problems, geopolitical problems and technical problems of verification and reinforcement.”

He also dismissed critics who state that all production of nuclear energy should be halted in reaction to the Fukushima nuclear energy crisis in Japan, emphasizing that nuclear energy is a great energy source and can be managed safely.