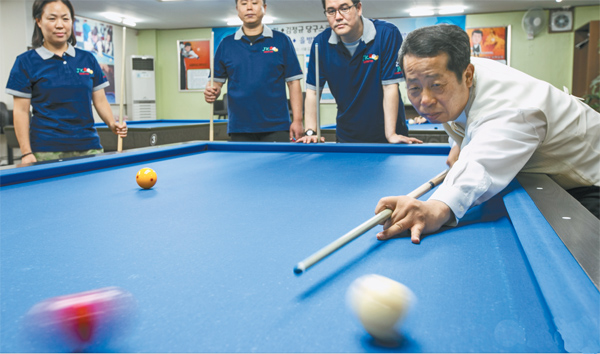 Cigarette-filled air, hazy lighting and a green table with red and yellow balls strewn on top. There’s often leftover Chinese food along with a bottle of soju to the side. At least that’s what pool halls used to look like in the 1970s and ’80s - just ask the men in their 40s and 50s who’d frequented the dives during their college years.

Back in the days before Internet cafes and noraebang (karaoke rooms), playing billiards was what young men did. There was something wrong with you if you didn’t play. By today’s standards, it’d be like not knowing how to play StarCraft.

But as times changed, so did tastes. In Korean, bang means “room,” and since 2000, there has been no shortage of bang trends - board game bang, PC bang (Internet cafes), noraebang and video bang, which was soon followed by DVD bang.

Soon, pool halls were considered lame, frequented mostly by middle-aged men. And as online gambling took off, billiard halls lost a lot of those middle-aged men, too. 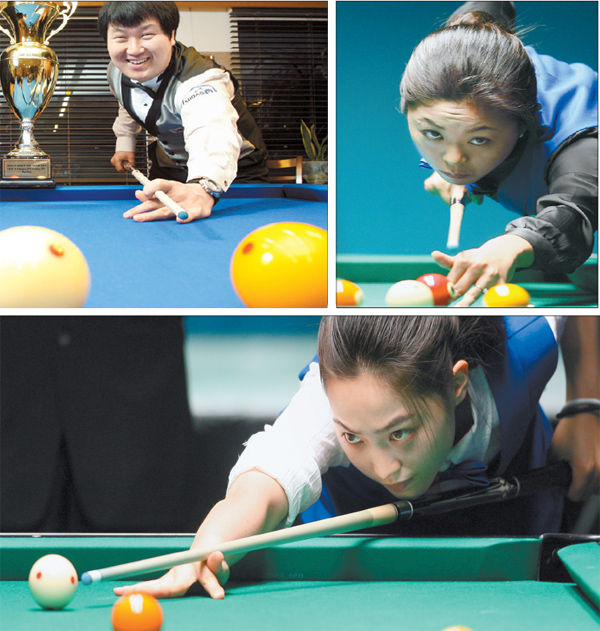 But then something happened in the late 2000s. The pool hall had a rebirth. By 2010 the number of halls rebounded 28,000 around the country. More importantly, the pool hall clientele had changed.

No longer were the halls full of older men; now women and men of all ages were dabbling in the sport. “After a slump, the sport is on the rise,” said Jang Young-chul, president of the Korea Billiards Federation.

Behind the rise was a dramatic change in how the game was perceived in Korea. In years gone by, billiard halls were considered hangouts where delinquents passed the time and got into fights - like in the Korean films “My Tutor Friend” (2003) and “Yellow Hair” (1999). Today, however, pool halls couldn’t be more different.

J.K. Carom School is a billiard academy in Garak-dong, eastern Seoul. The school is on the second floor of a commercial building, accessible only through a high-security fingerprint check. They accept no walk-ins, and visitors accompanying members pay 25,000 won ($22.41) for the privilege of playing pool there for the day. Inside, the 200-square-meter floor holds four billiard tables. Unlike the stereotypical dive, the club is lit up brightly, the walls painted a bright beige. No delinquents here. 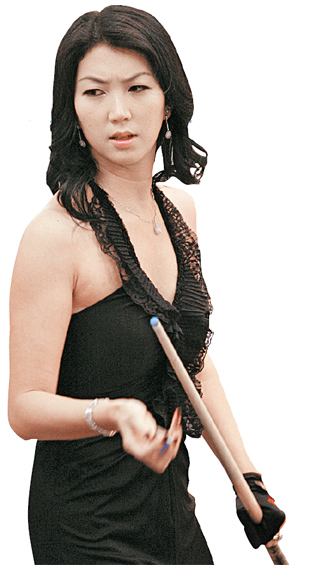 The school offers three-month, six-month and yearlong memberships. Cigarettes and alcohol are banned on the premise. Food consumption is also not allowed, although light beverages are allowed. There is also a private-lesson room for those who want one-on-one help. The owner is the 1998 Bangkok Asian Games’ bronze medalist Kim Jung-kyu.

“Billiard used to be a sport for the nobility, but only in Korea, it’s come to be regarded as a hobby for criminals,” said Kim, who opened the academy, “to turn billiards into a wholesome sport.”

A game for all

One reason billiards is growing more popular is the aging of Korea. It’s a great social sport for those in retirement. Pool halls often boast a large senior base, and many art and culture centers around Seoul offer billiard lessons for seniors.

One of the most popular haunts among the elderly is Guk-il Pool Hall in Gwangsu-dong, central Seoul. At 1,400 square meters, the hall is full of regulars and visitors. The side of the hall usually reserved for amateur clubs is decked out in plaques noting alumni clubs from various private high schools. Even during the day, more than 100 people occupy the 25 or so billiard tables. Most are in their 60s or older.

In Insa-dong, not far from Guk-il Pool Hall, there is the Sejong Billiard Club. At 330 square meters, the club had more than 20 patrons before noon on a recent day.

The owner of the establishment is Seo Byug-gil, who’s been in the business for more than 30 years.

“Most of the clientele are in their 60s and 70s,” said Seo. “When they worked, they would golf and go hiking. But now that they have retired, they like to revisit their youth by playing the game that they used to play when they were young.”

Billiards is an excellent sport for the seniors. The Korea Billiards Federation’s Na Geun-ju said that, despite appearances, the game is quite active.

“If you play for three hours, it’s the equivalent to a four- or five-kilometer [two to three miles] walk,” said Na, adding that playing pool is like “climbing a mountain.”

Furthermore, because players have to keep thinking, “it’s a great way to prevent Alzheimer’s.”

One man at the Sejong club is Mr. Kim, a 65-years-old billiards enthusiast. “I’ve tried golf, going to the gym and swimming, but there’s nothing like pool when you are getting on in years,” said Kim. “When you play golf, you can’t even laugh because you have to concentrate, but here you can always have a laugh while playing.”

But young people are also getting in on the fun. Wang Hyung-suk, 23, is the president and founder of High Run, Korea University’s billiard club. He said that the game has its charms among the young crowd, too.

“When I first started playing the game, I thought it was just a way to pass the time,” said Wang. “But I’ve come to realize that it’s a sport in its own right, one that helps being sociable.”

Lee Ju-young is a 23-year-old woman who belongs to High Run. She says that billiards appeals to women too.

“It’s no longer regarded as a smoking haunt for young men,” said Lee, who thinks the game is fun and appropriate for women, too. In fact, High Run has an equal number of male and female members.

Due to the demand, there are cleaner, nicer pool halls constantly opening up in university areas like Sinchon, western Seoul, and also in Gangnam, in the south of the city.

No longer a place for brawls

Pool halls and associated organizations have done their bit do shape up the sport’s image. To do away with the negative connotations, the Korea Billiards Federation even fought a legal battle against a singer in 2004 who used a pool hall in his music video as the setting for a fight.

The organization filed for an injunction against the music video, looking to cut the for the 1 minute, 20 seconds that showed sexual harassment and fights in a pool hall. In the end, the two parties came to an agreement and the scene was re-edited.

Right now, billiards is reinventing itself as it recruits members and presents itself as a sport. The rise of some good-looking players has also boosted the game’s appeal, as has the presence of Korean players on the international circuit and cable channels that air competitions and billiards-related programming.

On Sept. 2, in Guri, east of Seoul in Gyeonggi province, a 3-Cushion Grand Prix is to take place. The one-week event will see some 128 players from 20 countries take part.

“Korean players doing well at the event will hopefully be good publicity for the game,” said Na, of the Billiards Federation.

Despite its many gains in recent years, there remain significant hurdles. Negative stereotypes remain for many who still remember the old halls. And although billiards is a popular way to pass the time, there are not so many serious players. Only about 1,000 players are members of the Billiards Federation, and there are not enough competitions to create enough professionalism, especially compared to a sport like golf. But as it continues to grow and develop, it future is surely looking bright.