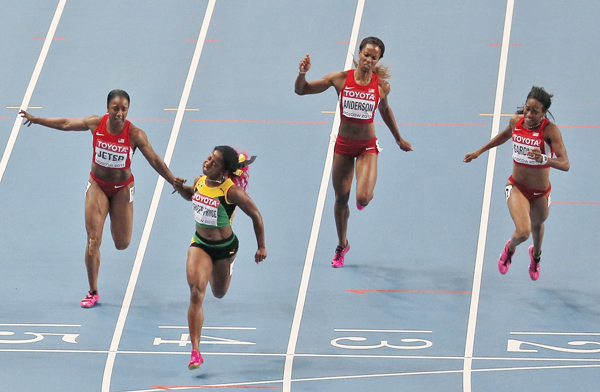 MOSCOW - Shelly-Ann Fraser-Pryce obliterated the field as Jamaica completed a 100 meters double at the world championships on Monday and showed it still has the edge in the battle of sprinting’s superpowers.

The United States had four athletes in the final for the first time, including defending champion Carmelita Jeter, but they had no answer for Fraser-Pryce, who took gold with the biggest winning margin in world championships history.

It was a second world title for the 26-year-old, who also won in 2009, and followed hot on the heels of compatriot Usain Bolt’s victory in the men’s final on Sunday.

Fraser-Pryce’s lightning-quick run on the bright blue track at the Luzhniki Stadium was Boltesque in its dominance as she set a world leading time of 10.71 seconds and finished streets ahead of her rivals.

Murielle Ahoure was second in 10.93 to give Ivory Coast its first world championship medal and she became the first African woman to finish on the podium in a sprint.

Jeter was the best-placed American in third with 10.94.

“I was just focused on getting that start,” Fraser-Pryce, who is renowned for her devastating ability out of the blocks, said.

“I knew I had to do that to actually do well and when I crossed the line I didn’t know I was that far ahead. I was just completely in that zone and trying to do my best. I wasn’t focused on anybody else.”

From the moment the two-time Olympic champion Fraser-Pryce shot out of the blocks, there was only going to be one winner.

The Jamaican, whose compact frame gives little indication of the power she can produce, was ahead in the first few strides and her rivals were left watching the soles of her bright pink spikes and matching hair extensions as she powered to the line.

“It was an amazingly fast race and I am still pleased to be on the podium,” said Jeter. “This has to be a medal that means a little more than my others because this has been a tough year,” added the 33-year-old who has struggled with injury.

Jamaica has missed out on just one global 100 meters title since the 2008 Olympics and that was Jeter’s world victory in Daegu two years ago.

Bolt made sure the Jamaicans drew first blood in Moscow against their U.S. rivals when he beat Justin Gatlin in the men’s final.

“I was so happy for Usain and [bronze medalist] Nesta [Carter] but at the same time that was their day and I was excited for them,” Fraser-Pryce said of her giant compatriot.

Fraser-Pryce, like Bolt, has a shot at adding two more medals in Moscow, the 200 and 4x100 relay, although unlike her compatriot, she will not start the 200 as the favorite, with American Allyson Felix aiming for a fourth world title. Reuters