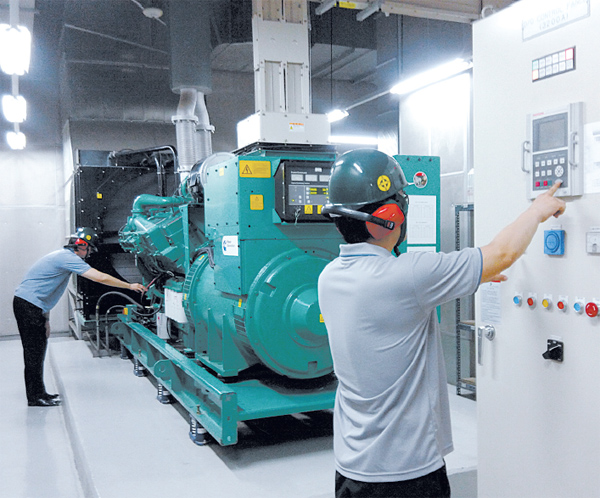 Kumho Asiana Group employees check the self-powered generator Monday at headquarters in Gwanghwamun, central Seoul. The group said it will run its own power generator until Friday to join nation’s power-saving efforts. Provided by the company

The nation’s top companies are joining the effort to save power as they adjust factory operation times and supply electricity with their own generators.

Many are participating in the power-saving campaign after urgent messages from the Federation of Korean Industries and Korea Chamber of Commerce and Industry. The Ministry of Trade, Industry and Energy also released a list of 20 major companies that didn’t follow government guidelines.

Kumho Asiana Group said on Monday its affiliates will operate their own generators until Friday on the order from Chairman Park Sam-koo. The conglomerate said each affiliate, including Kumho Tires, Asiana Airlines and Asiana IDT, will run generators five to nine hours per day and adjust air-conditioning systems.

“We expect to save about 200,000 kilowatts this week,” an official from Kumho Asiana said. “If the risk of blackouts in the nation continues, we plan to maintain the campaign until end of this month.”

Other major companies like Daewoo Shipbuilding and Marine Engineering, Hyundai Heavy Industries and Samsung Heavy Industries, also said they are running generators in their office buildings and factories.

Posco, the nation’s top steelmaker, announced in June that it would reduce usage by a total of 620,000 kilowatts in July and August by adjusting operation time of factories. However, as the nation’s power supply situation got serious, the company said last week it will cut an additional 60,000 kilowatts from its original goal.

GS Caltex said that it is also upgrading the power-generating capacity of its Yeosu plant to 15 megawatts using liquefied natural gas. The saving amount is 5 megawatts more than the government originally requested.

Other companies said they will not conduct manufacturing processes this week that require a lot of electricity.

LG Chem has been conducting maintenance of its electrolysis furnace of vinyl chloride monomer since Aug. 5 and will continue until the end of month. The company said electrolysis requires more electricity than any other process and suspension of the process will reduce total usage by 10 percent.

SK Innovation said it is conducting maintenance on its second?fluid catalytic cracking?unit?and other facilities from July to September, while Hyundai Steel will also fix some of its electro furnace and rolling mills this month.

Hyundai Motor Group said it is also trying to have efficient use of electricity by closing some facilities that are not in use, while minimizing work with melting furnaces in its plants. GM Korea said it has changed the battery charging time of forklift trucks to early morning or late at night, to avoid electricity peak times.

S-Oil, which was one of the top violators of the government’s electricity usage regulation, said yesterday it has reduced the production volume of petroleum products at its Onsan Plant in Ulsan in order to join the power-saving efforts.

“We are first among local refiners to shrink plant operation for power saving,” an official from S-Oil said. “The production volume can be covered after the power shortage risk is over.”

In office buildings, where wearing shirts without a necktie has become common and the use fans has been a basic method to cool off, companies have been controlling office lights and operation of escalators and elevators. Samsung Electronics said that escalators in its Secho Building will not be operated from 10 a.m. to 11 a.m. and 2 p.m. to 5 p.m.