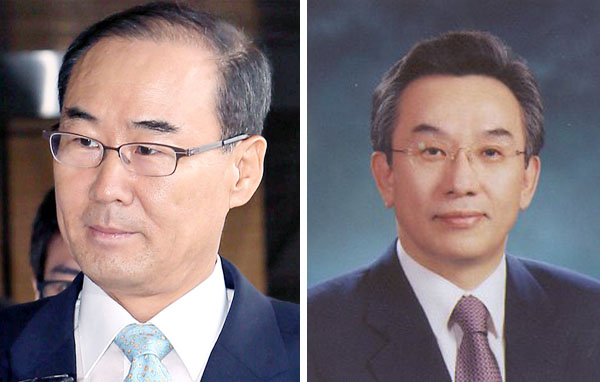 Prosecutors yesterday wrapped up their investigation into a former National Tax Service chief by indicting him for taking bribes from CJ Group.

Jun Gun-pyo was indicted for taking $300,000 (334.8 million won) and a designer watch as part of a broader investigation into massive corruption at the chaebol.

The Seoul Central District Prosecutors’ Office also indicted Heo Byung-yik, former deputy commissioner at the tax service, on charges of helping his former boss get the bribes by arranging a meeting with Shin Dong-ki, vice chairman of CJ Global Holdings.

Prosecutors said Jun colluded with Heo on getting the bribes in July 2006, when Jun was named the head of the tax service and was awaiting a confirmation hearing.

Heo, while in Shin’s office, was asked by the vice chairman to go easy on CJ in an upcoming audit and passed a bag stuffed with $300,000 cash, prosecutors reported. Heo and Shin went to Korea University together.

Heo then left the bag of cash at Jun’s desk at the tax agency.

The bribe originally came from funds that jailed CJ Chairman Lee Jay-hyun had siphoned off from the company, prosecutors said.

The watch Jun received was a woman’s Frank Muller worth 35 million won.

“Jun spent the money on a variety of business expenses after he took the helm at the agency, like overseas business trips and rewards for tax workers for their good work,” said a prosecutor involved in the investigation, speaking on the condition of anonymity.

But as of yet, prosecutors have not found evidence that Jun pressured tax officials to give CJ Group special treatment in the audit.

“Jun testified that he did not give any order related to the audit into CJ Group in 2006. Officials at the tax office involved in the audit all testified that they had not been influenced by Jun,” said the prosecutor.

Suspicions remain, however, due to the size and timing of the bribe and Jun’s position at the time.

In its investigation in 2006, the Seoul tax office was unable to discover false-name accounts that had been used for stock transactions. It has recently been revealed that CJ actually evaded 350 billion won in taxes on its stock deals.

CJ’s Lee has already been indicted for tax evasion and embezzlement, but dodged a further bribery indictment as the five-year statute of limitations for offering bribes expired. Shin of CJ Global Holdings avoided being charged as well.

The statute of limitations for taking bribes over 30 million won is 10 years, and thus still applies to Jun and Heo.