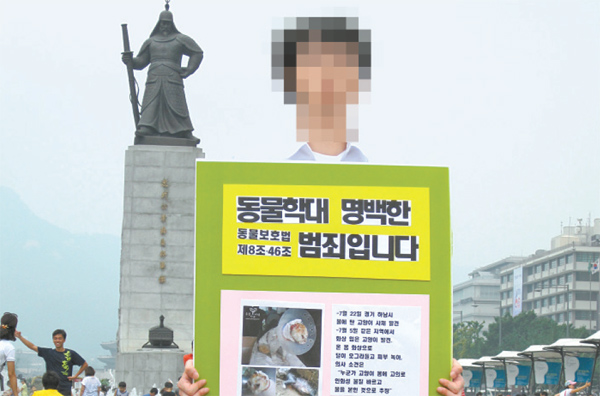 Kim, a university student and protestor-for-hire, holds a sign that reads “Abusing animals is a grave crime” in Seoul’s Gwanghwamun Square. By Lee Yoo-jeong

A college kid holding a sign that says “Abusing animals is a grave crime” stands in front of the iconic statue of Admiral Yi Sun-shin in central Seoul’s Gwanghwamun Square. You could easily take Kim, 28, for a passionate animal rights activist. But you would be wrong. He’s actually a protestor-for-hire.

A college senior at a Gyeonggi university, Kim posted a job wanted ad online that emphasized his “expertise in carrying out single-person rallies.”

The post said he wants to stand in for someone who wants to make a point but finds it difficult to engage in overt public displays.

Both the demand and supply sides of the part-time protester industry are on the rise as a wide range of individuals and interest groups seek to push their messages to the public while continuing to go about their daily business.

Kim says that many are critical of his chosen profession, but that he enjoys what he does and feels he’s contributing to society. When asked if he ever turns anyone down for ideological reasons, he says that usually only happens when he is asked to break the law.

Kim says he gets that over the course of 15 days, he gets about 10 calls asking him to stage a variety of different protests.

“I started doing this because some people are afraid to come forward and take action even though they have a message to deliver to the public,” Kim said.

On part-time job Web sites such as Albamon, it’s easy to find ads for hired stand-ins.

Those who seek paid protesters run the gamut from small- and mid-sized firms to individuals.

One small machine equipment company in Seoul hired three part-time protestors to stage a mini rally calling for the company’s subcontractor to pay up on a contract.

“We have only six employees,” said Jeong, the 43-year-old head of the firm.

“So, if only one or two staff members go out, the company can’t operate properly. That’s why I hired them,” he said.

“They just go out and sit there, and do what the other protestors do,” said a 40-year-old staff member at a company that recruits protesters for all kinds of rallies.

“But they can make at least 10,000 won for doing it. Sometimes, five people will compete for one position,” he said.