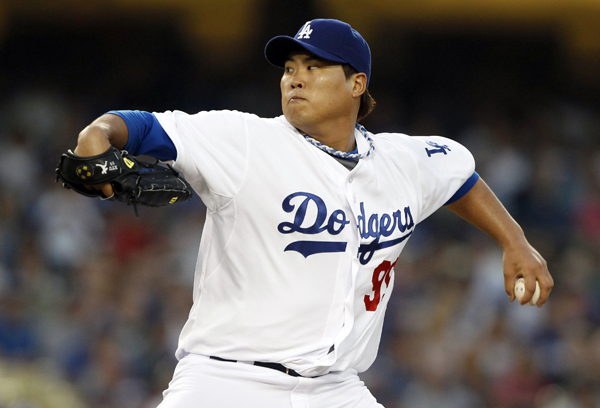 Los Angeles Dodgers’ pitcher Ryu Hyun-jin allowed one run in seven innings against the Mets on Tuesday. He is 6-0 in his last seven starts. [REUTERS/NEWS1]

LOS ANGELES - As torrid as the Los Angeles Dodgers have been, Ryu Hyun-jin is on an impressive roll, too.

The rookie left-hander extended his career-high winning streak to six games with seven innings of one-run ball as the Dodgers beat Matt Harvey and the New York Mets, 4-2, on Tuesday night for their first seven-game winning streak in more than three years.

“You’ve got to play a perfect game to beat them right now, and we’re not doing that,” Mets manager Terry Collins said.

“The Dodgers are having a lot of fun right now,” Los Angeles shortstop Nick Punto said.

Ryu (12-3) allowed one run and five hits in seven innings, struck out three and walked one.

The left-hander is 6-0 with a 3.12 ERA in his last seven starts since July 5. The Dodgers have won each of Ryu’s last nine starts.

“He was matching their guy pitch for pitch,” catcher A.J. Ellis said. “You could tell before the game he had an edge to him. He used all his pitches.”

“Ryu is the game plan when you got a guy like Harvey out there,” Dodgers manager Don Mattingly said. “Hyun-jin was obviously up to the challenge. I was looking to see how he was going to respond to this little matchup. In the games they’ve made a big deal of he’s responded really well.”

Harvey (9-4) gave up four runs and eight hits in six innings, struck out three and walked two. The right-hander was coming off his first career shutout, pitching a four-hitter in a 5-0 win over Colorado on Aug. 7. He hadn’t allowed an earned run in three of his previous four starts while going 2-1 with a 0.91 ERA in that stretch.

“I was pretty inconsistent all night. I just couldn’t locate anything,” Harvey said. “When I tried to go in, it was over the middle. When I tried to go away, I was yanking it a bit. And when you’re not hitting your spots and making quality pitches against a team like that, they’re going to put the ball in play.”

Kenley Jansen allowed a run in the ninth, but earned his 19th save in 22 chances.

Punto’s RBI double scored the tying and go-ahead runs in the fifth off Harvey (9-4). His hit in the left field corner scored Ellis, who walked, and Juan Uribe, who singled, making it 2-1. The Dodgers extended their lead to 4-1 in the sixth on Ellis’ two-out RBI single to left that scored Mark Ellis and Yasiel Puig, who both singled.

“When our pitchers are keeping us in games like this it just takes a timely hit,” Punto said.

Juan Lagares homered in the first for the Mets. John Buck’s RBI single with two outs in the ninth accounted for their other run. AP