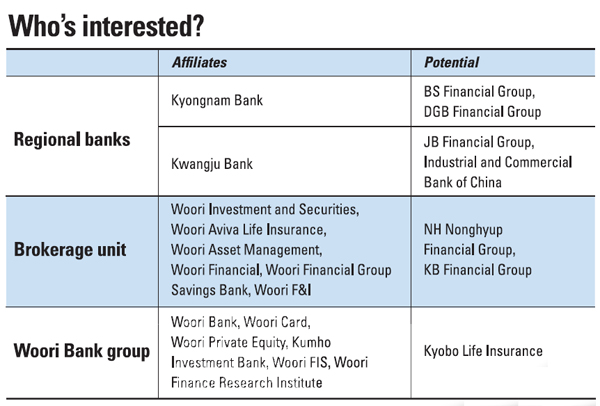 With a package of Woori Financial Group brokerage units, including Woori Investment and Securities, being put out for sale tomorrow, the government’s privatization plan for the country’s largest financial holding company is expected to gain momentum.

However, the fate of Woori Financial Group affiliates, which have been divided into three groups for sale, is expected to turn out differently as potential buyers are reportedly being swayed by market conditions and regional demands.

The procedure for privatization will continue with the sale of the brokerage units tomorrow and Woori Bank next year.

The road ahead for the government’s divestment of the first batch of regional bank affiliates is expected to be challenging due to ongoing opposition from residents and businessmen belonging to regional chambers of commerce and industry who believe the institutions should be locally owned. They say potential local buyers should be given preference.

However, the government maintains the position that the sale should be based on free-market competition.

On the other hand, unlike the uncertainty surrounding the sales of regional banks, the sale of Woori Financial Group’s brokerages, including Woori Investment and Securities, is expected proceed smoothly with several investors already expressing interest in buying the group’s securities arm.

On June 26, the Financial Services Commission announced detailed plans and strategy for privatizing the country’s first and largest financial holding company, while at the same time keeping its fingers crossed. There were three attempts during the Lee Myung-bak administration to recoup public funds invested in Woori Financial Group. All failed due to a lack of interest on the part of investors.

According to the road map laid out by the FSC’s Public Fund Oversight Committee, 14 affiliates of Woori Financial Group, the country’s largest financial holding company with 325.7 trillion won in assets, have been divided into three groups - regional banks, brokerage units and Woori Bank.

Since 2010, the government has been trying to recoup public funds that were invested to save four troubled banks (Hanvit, Peace, Kwangju and Kyongnam) from going bankrupt following the Asian financial crisis in late 1990s by merging them into one. A total of 12.8 trillion won ($11.4 billion) was invested by the government in 2001 and as of the end of May, the government had recouped a total of 5.7 trillion won, according to the FSC.

Regional banks up in the air

The focus now is on prospective buyers for Woori Financial Group affiliates.

So far, KB Financial Group and NH Nonghyup Financial Group have directly or indirectly expressed interest in buying Woori Investment and Securities. However, unlike the heated competition for the brokerage units, there is lingering controversy over the sales of regional banks - Kyongnam and Kwangju - and little interest in Woori Bank.

On July 15, the bidding for the regional banks started and the deadline for submitting bidding proposals is Sept. 23. The bidding price for Kyongnam Bank is expected to be about 1.2 trillion won and 1 trillion won for Kwangju Bank. Kyongnam Bank has drawn interest from BS Financial Group, which has Busan Bank as its main affiliate, and DGB Financial Group, with has Daegu Bank as its affiliate.

For Kwangju Bank, JB Financial Group and the Industrial and Commercial Bank of China are reportedly interested.

However, the sales process is expected to be volatile due to regional and political interest.

“It is only fair that Kyongnam Bank is given back to the people of South Gyeongsang and Ulsan where it belongs,” said Choi Chung-kyung, chairman of Changwon Chamber of Commerce and Industry. “The bidding shouldn’t be based on the highest price. The South Gyeonsang region should be given primary negotiating rights.”

The two regions plan to form a consortium based from their regional chambers of commerce and industry to bid on each of the two banks. Some businessmen have even threatened to boycott if Busan Bank or Daegu Bank take over Kyongnam Bank.

Though there are some who have expressed interest in bidding, they are taking a watch-and-wait approach because of negative regional sentiment.

“We are quietly preparing [for the bid],” said an official from BS Financial Group. “But it is too much of a sensitive issue because it involves regional conflict with South Gyeongsang.”

Despite regional arguments, FSC Chairman Shin Je-yoon has stressed that Woori Financial Group privatization should be based on “selecting the bidder with the highest price.” 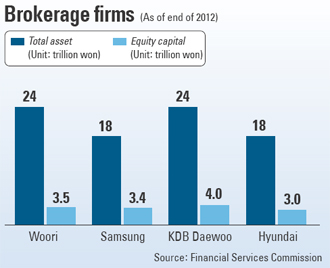 Unlike regional banks whose sales outlooks are not so rosy, Woori Investment and Securities is expected generate heated competition.

The brokerage units to be sold with Woori Investment and Securities are Woori Aviva and Woori Asset Management, and the sale price is expected to be about 1.3 trillion won.

Currently, NH Nonghyup, Kyobo Life Insurance and KB Financial are reported to be interested in the brokerage unit.

Hyundai Motor Group has been mentioned as a potential bidder but the conglomerate denied it.

“We are not considering the bid at all,” said an official from Hyundai Motor Group. “We are currently raising the capability of our own HMC Securities and we see no need to acquire another brokerage firm.”

Unlike the bank business, the securities sector is considered to be profitable. Many financial groups including KB Financial and NH Nonghyup have their own securities arms, but their market share is not significant.

“Realistically speaking, it would make sense for us to look into acquiring Woori Investment and Securities,” said an official from KB Financial Group. “Nothing, however, has been decided and we’re not in the process of internally reviewing the acquisition procedure.”

Chairman Yim Jong-yong also said earlier that if NH Nonghyup Financial Group purchases Woori Investment and Securities, it would be “able to raise its competitiveness in the industry.”

“We created a task force in June to look into acquiring Woori Investment and Securities,” said an official from the group. “We believe the material is attractive and we judged that it helps improve our portfolio.”

Yim, though, did say that the consideration should be based on capital flexibility.

Concerns are also rising over the sale of Woori Bank in which bidding is expected to exceed 5 trillion won. The sale will begin early next year, and investors so far have remained silent and cautious.

The only public interest that has been shown is from Kyobo Life Insurance. KB Financial was also reportedly interested in Woori Financial Group’s banking business, but recently it has shown signs of backing away.

Lim has emphasized that the financial group should move away from its banking business and diversify.

NH Nonghyup Financial Group Chairman Yim had also firmly said that it “is not interested in Woori Bank.”

Local banks have been posting falling profits this year, tightening their belts by closing down branches and searching for new revenue streams.

The FSC’s plan to divide Woori Financial Group into three groups was based on the belief that it was the only way to meet the government’s three principles for privatizing the group: maximum recouping of public funds, expediting the process and contributing to the country’s financial industry.

“Before coming up with this plan, we reviewed the overall sales conditions and investor sentiment,” said Nam Sang-koo, chairman of the Public Fund Oversight Committee. “And we thought that this plan would be the most realistic one.”

Analysts also are optimistic. They expect the government’s fourth attempt to sell Woori Financial Group to be better compared with previous attempts.

“The Park Geun-hye government’s will to privatize Woori is very strong, even stronger than the past government,” said Lee Han-byul, an analyst at Hanwha Investment and Securities. “Taking aside all the political and regional issues, we’re optimistic that sales will work out as planned.”

“There is a higher possibility now that privatization will work,” said Hwang Seok-kyu, an analyst at Kyobo Securities. “The sales notice came out soon after the plans were announced, on schedule, which is a good sign.”

Lee from Hanwha Investment and Securities also said, “There are many potential bidders this time who are eyeing regional banks and brokerage units, so we’re positive about the overall process this time around.”

In regard to concerns that market conditions are not favorable enough, Lee said that only a dramatic economic shock would affect the privatization process..