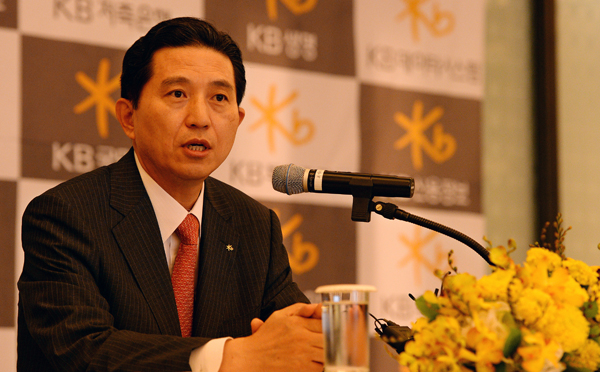 KB Financial Group Chairman Lim Young-rok speaks to the press yesterday at Westin Chosun Hotel. The new chairman stressed a “back to basics” philosophy in difficult times when profits are falling. [NEWS1]

At a time of plummeting profits at local financial institutions, Lim Young-rok, rookie chairman of KB Financial Group, said yesterday his holding company will go “back to basics” and strengthen business areas in which it can perform best.

Lim also stressed that KB is working to boost its non-banking businesses and diversity its profit structure.

“We will do our best to regain the status of a leading group by building up businesses that KB Financial Group is best at and also work to become a leading global financial institution,” Lim told reporters yesterday. “We will also look into boosting productivity and efficiency as part of risk-management efforts.”

Lim’s comments were made at his first press conference after he was inaugurated KB Financial Group chairman last month, succeeding Euh Yoon-dae.

An official from KB Financial Group explained that going back to basics refers to focusing on the retail banking business, getting a tighter grip on risk management and ensuring internal stability.

More than a month has passed since Lim was appointed to lead the group and he inherited many challenges: a sluggish economy, declining profits and changing financial trends.

The group’s net profit in the first six months of this year was sliced in half to 575 billion won.

The majority of the group’s earnings comes from its flagship KB Kookmin Bank.

Focus has also been on whether KB Financial Group will make a bid to acquire affiliates of Woori Financial Group being put up for sale to boost its non-banking businesses.

“KB Financial Group is a holding company that was launched with its roots in the banking business, and therefore, we have been making efforts to strengthen our non-banking businesses,” Lim said. “Based on the direction of maximizing shareholders’ value and creating synergy, we have considered various merger and acquisition cases.

“Even now, we are looking into what KB Financial needs most to diversify its profit structure by enhancing our non-banking business.”

In regard to interest in Kwangju Bank, one of two regional affiliates of Woori Financial Group already up for sale, Lim expressed a negative view, saying he has already stated that the basic direction of merger and acquisition plans is to enhance non-banking sector businesses.